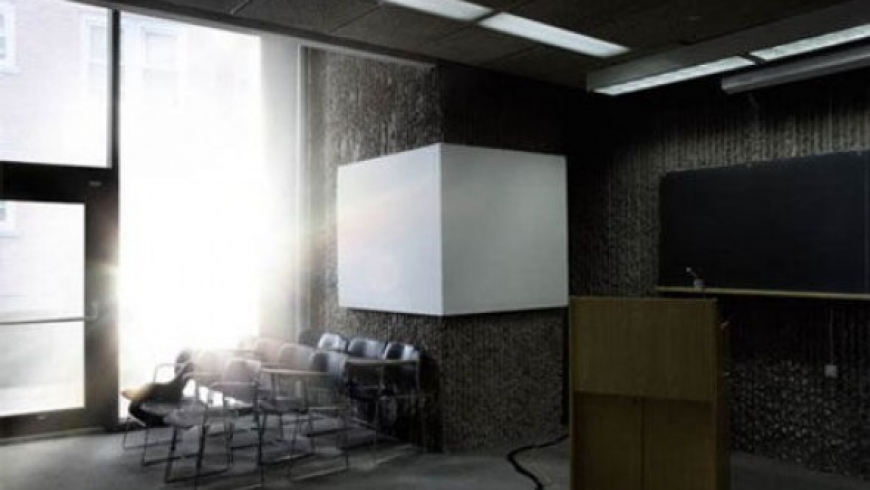 The unique architectural environment of the university campus is imbued with the legacies of idealism and institutional rhetoric, revolt and tradition, offering a microcosm of society’s principles and aspirations. Built as one of ‘the seven’ new universities in the mid-1960s, The University of Warwick was founded during an optimistic period of liberal thinking, when the drive towards educational reform was matched by a dynamic architectural and social impetus.

To mark the 40th anniversary of the founding of the University of Warwick, the first exhibition developed by the Mead Gallery in 2005 introduces three artists who have each produced coherent bodies of work that engage with the social, architectural and institutional histories of universities.

Commissioned for the University of Luneburg in Germany, Christian Philipp Muller’s The Campus as a Work of Art surveys the spatial layouts of a hundred campus universities, from prototype institutions such as the University of Virginia: a self-contained ‘ideal’ community built by Thomas Jefferson in 1817, to Ohio State University, whose Wexner Center for the Arts suggests the way in which universities have seen the arts as a conduit, orientating them towards the world at large. Muller categorises these spaces in an analysis of the ways in which Universities formulate their institutional identities, from Model Universities to Universities as the Wellspring of Society.

Nancy Davenport’s Campus series of digitally manipulated photographs shot at universities in the USA and Canada, frames melancholic scenes of the ‘New Brutalist’ architecture adopted by numerous institutions after the 1968 student uprisings. Her images depict a conflicted architecture, intended as revolutionary and progressive yet illustrative of a siege mentality. In other images, rays of light stream through classroom windows, recalling idealised images in university prospectuses. Here though, the light is heightened to such a degree that it evokes not the optimism of enlightenment and learning but carries uneasy overtones of technologically driven disaster.

Learning and education underlie the practice of Austrian artist Rainer Ganahl. His Seminar/Lecture Series (1994- ongoing) is a kind of intellectual travel-log or diary, recording his attendance of lectures and seminars at universities and art institutions around the world, including Warwick. The project is an archival representation of the way in which information and ideas are developed and transmitted, capturing both the speaker and the audience within their institutional surroundings.

Following this exhibition, a photograph by Nancy Davenport was acquired for the University of Warwick Art Collection.