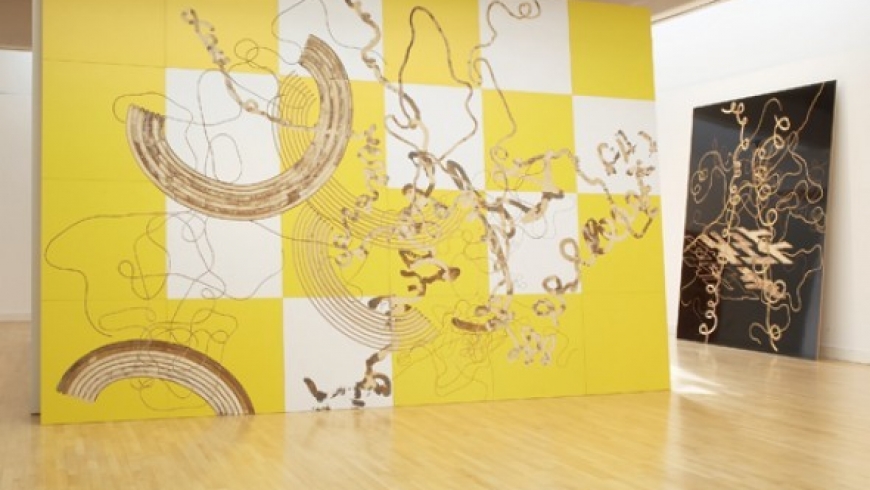 DJ Simpson has been described as ‘a painter who doesn’t paint’, and refers to his own work as ‘drawing with electricity’. He is renowned for his large scale paintings which humorously reference grand works from the Abstract Expressionist canon, and the influence of painters such as Jackson Pollock and Willem de Kooning resonate playfully throughout his work.

Simpson works with laminated panels which are either pre-painted or have a bonded surface such as formica. His ‘brush’ is an electric routing tool, commonly used for the fine finishing of carpentry. He employs this tool to perform a fluid, abstract gesture, gouging into the colourful plywood or MDF panels to reveal the hidden textures underneath.

The end results are beautifully vibrant and energetic artworks which sit somewhere between drawing, painting, sculpture and installation. Their sheer scale and technique parodies and expands the history and language of modern abstract painting.

This exhibition is DJ Simpson’s first major museum show since ‘New Labour’ at the Saatchi Gallery in 2001. It presents significant works from collections and galleries in Europe and presents an important survey of Simpson’s development into the mature phase of his career.

The issues around drawing, painting and abstraction with which Simpson engages are expanded in a discrete exhibition of some of the most important works from the University’s own collection. These include major early paintings by Patrick Heron, Gene Davies and Jack Bush as well as works relating to recent acquisitions of major installations by David Batchelor, Ian Davenport and Liam Gillick.

The exhibition is accompanied by a beautiful illustrated book with essays by David Burrows and Simon O’Sullivan.