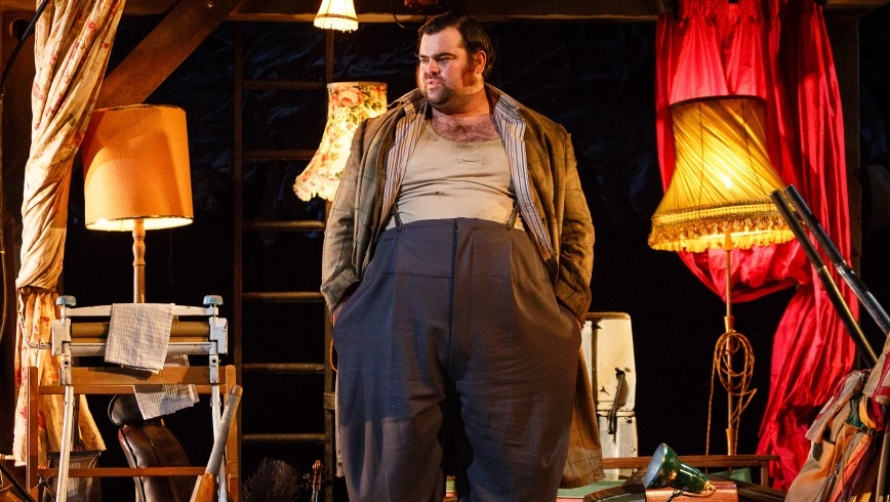 I was lucky enough to be in Cornwall this summer during the opening run of Steptoe and Son, which comes to the Arts Centre on 23 October. As well as at the Arts Centre, I’d seen lots of Kneehigh performances in village halls, and once on a memorable and blowy night one September on the cliffs around Botallack mine in Cornwall, so I was looking forward to seeing their summer home, The Asylum. It’s a purpose-built performance space near St Agnes and feels like a combination of the Eden Project and a circus tent.

There was a real buzz the night we were there in the spit-and-sawdust theatrical bar, with punters tucking into a delicious choice of freshly cooked local food (the fish chowder was a highlight and the cakes were good!). There’s also a small stage for post-show music.

When we were ushered into the tent it really did have a circus-type atmosphere (although thoughtfully Kneehigh provide cushions and rugs to keep you cosy), and I was pleased to see that the set was typically Kneehigh – a right old jumble of intriguing props including a Carousel horse, old Dansette record player and assorted bizarre gubbins for you to wonder at before the show started. It was perfectly suited to the scrapyard setting of the action.

Now I have to come clean here – I was bought up on the original TV series of Steptoe And Son on a tiny black and white telly in the 70s, and remember it as a half an hour of two old gits bickering in the clutter from hell and my parents laughing like drains. So the performances by Wilfred Brambell and Harry H Corbett are pretty well etched on my brain.

Kneehigh have taken four of the TV episodes and presented them as separate episodes, linked by music (cue the onstage Dansette) and a mysterious female character who drifts in and old of Harold and his Dad’s lives, marking the passing of the years. They’ve cast Steptoe and Harold beautifully – with Mike Shepherd (Kneehigh stalwart and co-founder) playing the ‘dirty old man’ and newcomer Dean Nolan as Harold. Both create a really believable relationship (and you do forget the originals), although Steptoe’s new lease of life in the final stretch verges a bit on the miraculous for me. Dean Nolan I particularly enjoyed. For a big bloke (think a young Robbie Coltraine), he moves fantastically and brings the house down by doing the splits. There was a great poignancy about the play, which grew and grew (I challenge anyone who’s got ageing relatives not to be moved by the scene where Harold and his Dad help each other dress).

I think fans of the company will enjoy it but it will be also interesting to see the reaction of people who aren’t familiar with Kneehigh or with the characters. You can book online or call us in the Box Office on 024 7652 4524.