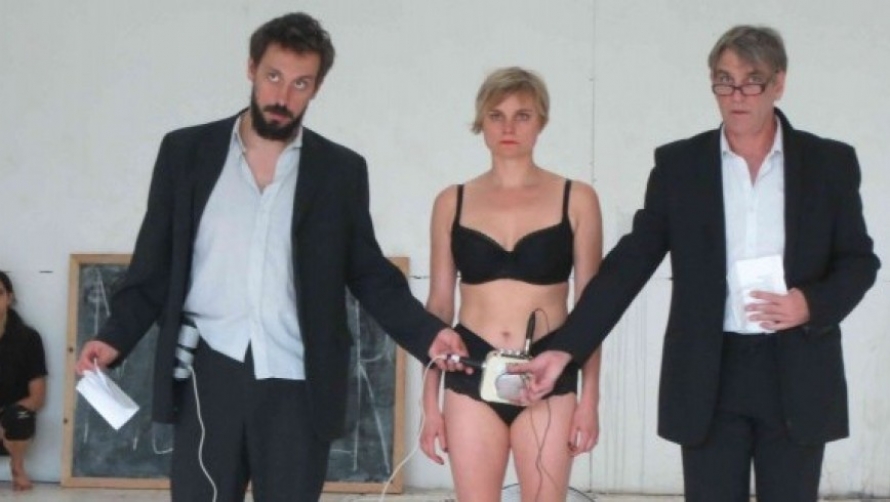 I can guarantee you won’t have seen anything like this before. Bold. Eloquent. Assertive. Charlotte Vincent’s visceral dance theatre show Motherland is likely to leave you speechless.

The audience are immediately confronted with a cast that spend a great deal of time looking out into their audience, which is wonderfully unsettling. Vincent’s socio-political agenda quickly becomes clear- with each glance into the stalls, cast members seem to ask “What do you think about that, then? And what are you going to do about it?”

The blank white set, later to be dynamically spattered with layers of blood and soil, creates the feel of being stood in a modern gallery space- each choice of movement and prop to be carefully scrutinised as you would a conceptual installation. Cast members often form strong, almost sculptural tableaux which would undoubtedly have just as powerful an effect as a still image.

The best thing about this show is that the cast simply aren’t afraid to push visual, aural and conceptual boundaries to the limit. The performers unashamedly utilise and emphasize their entire bodies, which is gloriously refreshing. The vagina literally takes centre stage throughout, the entire show being constructed around the pitfalls and misconceptions of the possession of one (or lack thereof).

Constantly shifting sketches completely absorb the audience for what is a fairly long show. Each vignette acts as a deliciously unique theatrical aperitif, giving enough of a taste of an idea to provoke thought before moving on to a newer and bolder flavour each time. The show as a whole remains unpredictable, punctuated only by darkly comedic recurring ‘periods’ for the female performers, who- what else?- bleed, collapse and play the violin.

The fact that each cast member, young and old, is revealed to be a talented vocalist and musician simply adds to the enjoyment of the performance. The tone ranges from outright slapstick comedy to tender and tear-inducing evocations of childbirth, giving each audience member something to identify with.

Contemporary choreography, cracking vocal work and ideas so brave they will make you squirm in your seat, all conveniently placed within the walls of the arts centre. Do yourself a huge favour and go and see it!