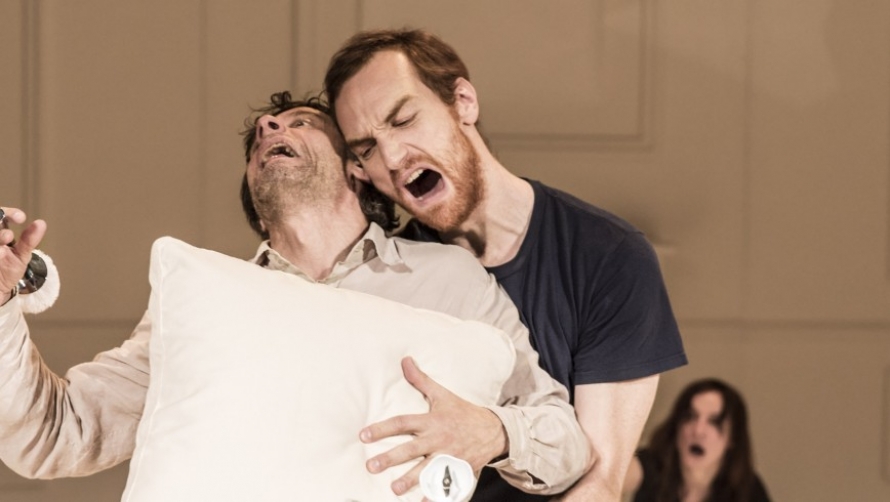 Cheek by Jowl are regulars at Warwick Arts Centre, and this year they have returned with an unconventional and subversive show: Alfred Jarry’s Ubu Roi. Directed by Declan Donnellan and Nick Ormerod, this show breaks all the boundaries of accepted social behaviour, featuring outrageous and animalistic performances from the versatile actors onstage, enhanced by innovative staging techniques.

The beginning of the play is unlike anything you might have seen before. A pristine Parisian living room hosts the main drama, but a teenage boy with a video camera leaves the stage and roams the rest of the ‘house’, which we see projected onto a screen, and we are immediately thrown into the private life of the family who live there, which ominously foreshadows the crude and violent world of tyrannical King Ubu (for example we are shown the close-up of a raw piece of meat being prepared). The elegant and friendly dinner party that follows is punctuated with sudden scene changes as we are dragged into the world of Pa and Ma Ubu. The actors suddenly transform themselves from polite and elegant hosts and guests into wild and grotesque characters who fight for power and the ambition of the throne. It’s unnerving, but brilliantly executed.

This play was a milestone of Jarry’s career, and is a key text in theatrical history, as it was a significant precursor to the Surrealist movement and Theatre of the Absurd. It is staged here in French with English surtitles, but don’t let that put you off; I can confirm that the audience thoroughly enjoyed themselves, and there was laughter the whole way through, proving the language issue to be no barrier to entertainment,

Come and see this thrilling dark comedy at Warwick Arts Centre, until Sat 2 Feb. Click here to book your tickets or call the Box Office on 024 7652 4524.