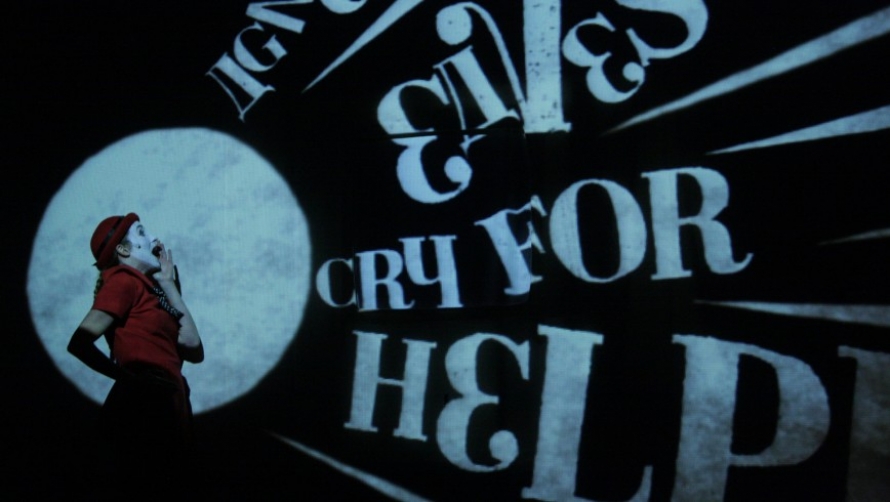 Having wowed audiences and sold out two runs at the National Theatre, it’s safe to say I went to see 1927’s The Animals and Children Took to the Streets with high expectations. Phrases such as ‘dark fairytale’, ‘incredible projections’ and ‘free sweets’ only built those expectations higher. I left the theatre 70 minutes later grinning from ear to ear.

Let me be clear – this is an amazing show.

The setting for the show is the Bayou Mansions – a tenement block crawling with cockroaches and covered with suspicious stains. But the bugs, we quickly learn, aren’t the biggest pests – it’s the children; feral pirates who swarm the streets after dark and promote upheaval with the ominous chant “We want what you have out there”. After a riot in the city park which terrorises the respectable classes who make up the rest of the city, a sinister plan is hatched by the authorities to get rid of these nuisance children once and for all.

The company is made up of just three actors (Sue Appleby, Lewis Barfoot and Eleanor Buchan) who swap seamlessly between a range of characters – the depressed caretaker of the Bayou Mansions whose deadpan inner monologue provides a lot of the shows many laughs; a junk-shop owner and her revolutionary daughter, and Agnes Eaves, the do-gooder who arrives in the Bayou Mansions with her daughter Evie with the firm belief that her art club is just the thing to improve the lives of the Bayou children.

The most arresting part of the production is the projections which form the set. – comprised of three screens onto which the skillful, witty and astonishingly beautiful animations (the work of Paul Barritt) conjure a world a sinister shadow-nannies, crawling insects and packs of screaming children. The actors’ interaction with these projections is perfectly timed and precisely choreographed; there are times when you completely forget that the animated characters are projections at all. The entire show is infused with an ink-black humour which makes the gently sinister undertone all the more creepy; the piano score which carries the show along adding to this malevolent atmosphere.

It’s a savagely funny, witty and breathtaking show which really should not be missed. Make sure to get your tickets now for an evening that will reinforce that old lesson – never accept sweets from strangers.

The Animals and Children Took to the Streets runs at Warwick Arts Centre until Sat 16 Feb (includes a Saturday matinee). Click here to book your tickets, or call the Box Office on 024 7652 4524.