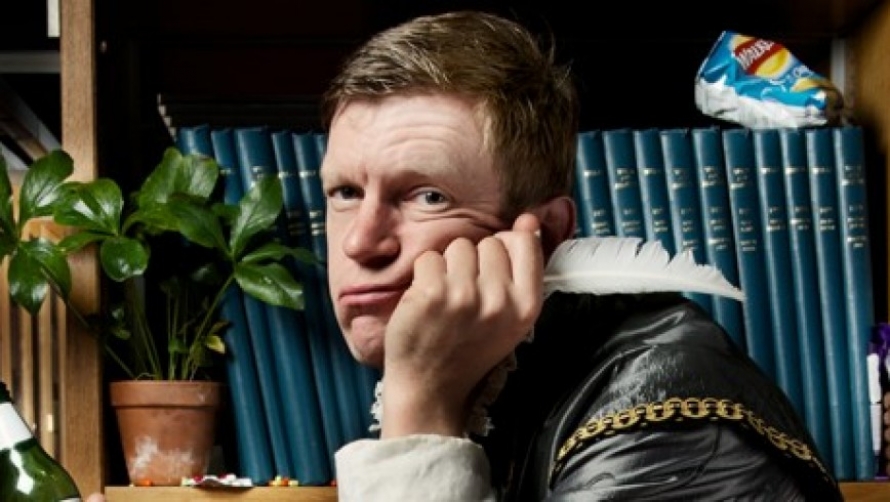 A seventeenth-century health book, 1,424 pages in length, which combines obscure medical beliefs, classical philosophy and theological doctrine in a lengthy analysis of melancholy may appear to be an unlikely source for a stage adaptation. However, in the skilled hands of the wonderful Stan’s Café, Robert Burton’s formidable and seemingly unadaptable work, The Anatomy of Melancholy has been used to create a performance that is entertaining, thought provoking and often, extremely funny.

The key ideas from the book are presented to us in turn by a charismatic four piece, whose deadpan comic timing mean that Burton’s ideas, and the ideas of other influential writers, are conveyed to us with a sense of fun and wit. The use of flipcharts, song, dance and mime make this a clear and engaging presentation of the arguments, and ensure the show is interesting and gripping throughout.

The material in itself is fascinating, and Stan’s Café exploit the seeming absurdity of Burton’s world for comedic effect: we hear of debates over whether or not it is acceptable to ask a wizard for a cure for melancholy, we are introduced to a man who is tricked into thinking that he can put out a town fire by urinating, and the theory of humours is explained in detail, a theory which appears at first bizarre to the modern day ear, with our extensive medical knowledge.

One of the real joys of this production however, is the way in which it endeavours to prove that many of Burton’s ideas still resonate in society today. One of the biggest laughs of the night arose from a criticism by Burton that the seventeenth-century university system meant that anybody could get a degree. As a twenty first-century student, this criticism feels entirely familiar. The entire production is designed to highlight such continuities. The cast are dressed in period style costume, but with contemporary twists, and munch on chocolate bars and crisps on the seventeenth-century set. This approach means that this production is an illuminating exploration of the continuity in human behaviour across the ages; the theory of humours may no longer be seriously considered, but many of Burton’s observations about the human character and about mental illness remain as pertinent and important in modern society as they were when he first set pen to paper.

This is an absolutely unique production: enjoyable and incredibly interesting, it is certainly not to be missed.

The Anatomy of Melancholy runs until Fri 15 Mar 2013 – book your tickets online.