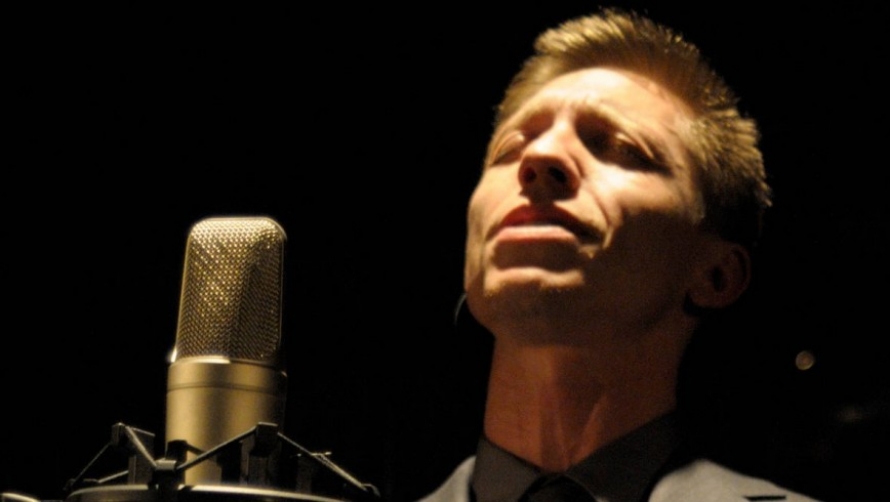 I’ve never seen a man command the stage as well as Valentijn Dhaenens in BigMouth. His exceptional talent for using his voice in dynamic and exciting ways makes this installment of the (L)one series a particularly wonderful one. Taking excerpts of speeches from throughout history, from Socrates to George Bush, Dhaenens demonstrates to the captivated audience that despite the thousands of years that separate them, speechmakers still use the same tricks of the trade even today, and that these are far from honest.

Emotive language, rhetorical questions – we learn about all those tricks of persuasion in school as we study the great speeches of the past. And yet, Dhaenens questions, who should we listen to? As I heard the speeches of Patton and Goebbels, both made in 1945, I couldn’t help but relate more to the emotive and sincere words apparently spoken by Goebbels, and be disgusted by the crude and belittling rhetoric adopted by Patton. Proof then, that as Dhaenens suggests, no one can ever really know the truth behind words. Even the speech of Osama Bin Laden, portrayed with sincerity, and apparent honesty, drew the audience in, made them listen, and made them consider. With an exceptional and convincing use of various languages (subtitled for this less linguistically able audience members, such as myself!), BigMouth takes the audience around the world in its journey through speechmaking.

But it is not only in his voice that Dheanens excels here. The use of numerous microphones and a looping effect enabled him to create the atmosphere of, for example, a press conference, and to create musical effects which ran as an undercurrent to speeches. Coupled with an uncanny skill for mimicking body language, each character was separate and entirely believable. The words of these famous, and not so famous, speeches echoed around the walls of the arts centre’s Studio, leaving the audience with one, final phrase: “The greatest thing you’ll ever learn is just to love, and be loved in return”. This famous line, from the song Nature Boy, reminds us that behind the lies, the front, the power-mongers, there can be only one truth.

This is a performance not to be missed. Dhaenens dynamism far exceeds anything I have seen before, and since it returns this evening, with a pre-show On The Couch talk with the man himself, you’d be mad to miss out!

Valentijn Dhaenens is the performer and director of BigMouth, and he will be On the Couch in conversation with Billy Barrett, undergraduate student, and Jason Mast, global research fellow at Warwick’s Institute of Advanced Study tonight (Wed 22 May) at 6.15pm. This will be followed by a performance of BigMouth at 7.45pm.