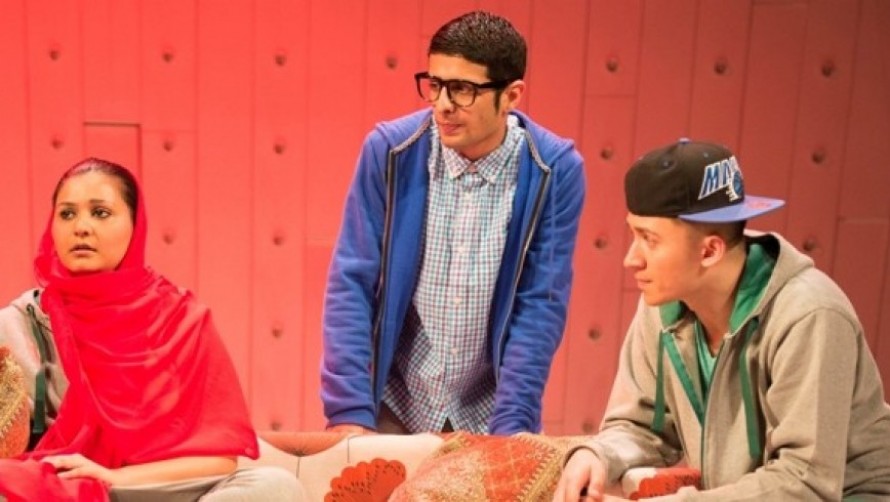 According to the programme, the phrase Break the Floorboards or “Chak de Phatte” is the Punjabi phrase for “Go for it”, and that is exactly what this company do! From the very first moment they jump on stage in their tracksuits and converse shoes, the performers’ infectious smiles and boundless energy transport us into the wonderful world of Bollywood.

Break the Floorboards tells the story of Zain, a Muslim teen who dreams of becoming a glitzy dance star. As the local community prepares for the march of the EGBDP (English Great British Defence Protest), it becomes clear that Zain is frankly more interested in his pursuit of a cheese and tomato pizza, than any kind of political debate.

Yasmeen Khan’s clever and comic script is supported throughout by technical ingenuity, with interactive screens, inventive lighting choices, and a soundtrack that underpins movement and dialogue. The Brechtian feel of the set is also enhanced by director Pravesh Kumar’s choice to use multi-role-play. The company of six’s onstage transitions between different characters were so seamless that when the time came for them to take their bow, I heard a member of the audience exclaim “Where are the rest of them?!”

With lots of laughs, impressive dance sequences, an emotive soundtrack and an uplifting finale, Break the Floorboards effortlessly balances serious contemporary issues with light-hearted escapist enjoyment, and isn’t one to miss!

Break the Floorboards continues its run at Warwick Arts Centre until Sat 25 May. Tickets available here.