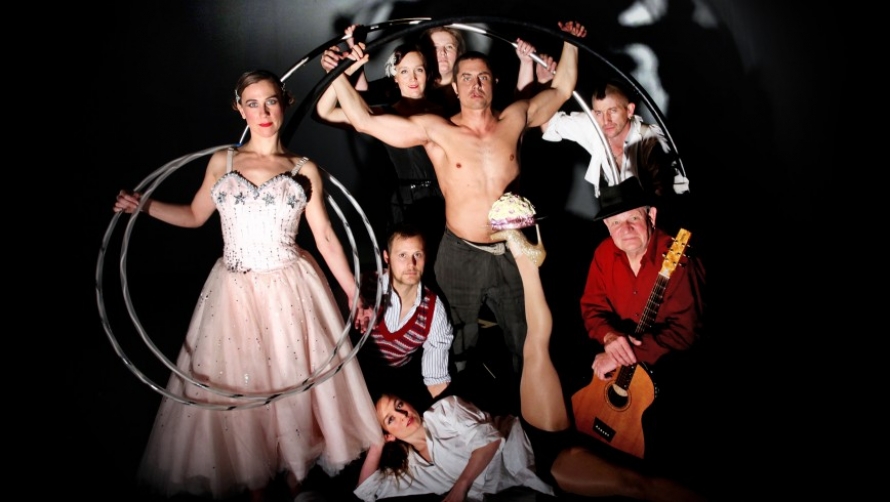 “Contemporary Circus” is not a phrase I knew to exist prior to watching Pirates of the Carabina’s latest offering, Flown. Dispel the troupe of breakdancing clowns that have undoubtedly popped and locked their way into your mind upon hearing this phrase, and allow me to give you an insight into the absolute magic that this producing outfit sent catapulting into the audience (literally and figuratively).

One of the most effective aspects of this piece is the element of absolute chaos and unpredictability. Audience plants, staged accidents, ‘failed’ acrobatic tricks and deadpan comedy work beautifully to simultaneously unsettle and comfort the audience: the constant panic of genuine disruption to the performance soon allayed by a glorious sense of being privy to a raw, collaborative open rehearsal. The chaotic structure of the piece in fact lent itself to a comparison with street performance, each member taking their respective turn in the spotlight. Ensemble members look on, the collective experience of the rehearsal process suddenly thrown open to audience members, with all the joys of creative failure as well as triumph.

What dominated the hour of performance were above all dazzling physical feats. The high level of discipline (and apparent danger of falling) was astounding- in this sense, the traditional circus element was fulfilled. However, what Pirates of the Carabina also provide is beautiful original music to accompany each skit, flashes of contemporary dance and physical theatre, and most gloriously, deadpan stand-up comedy. The company of nine parody the conventional showbiz glitz and glamour associated with the circus, reaching its hilarious conclusion with an aerial silk performer losing her wig mid-performance.

If you want to laugh, be moved by contemporary routines and ultimately be entertained, this show’s for you. It’s Circus…but not like anything you’ve ever seen before.

Flown is running until Thu 30 May in the Theatre.