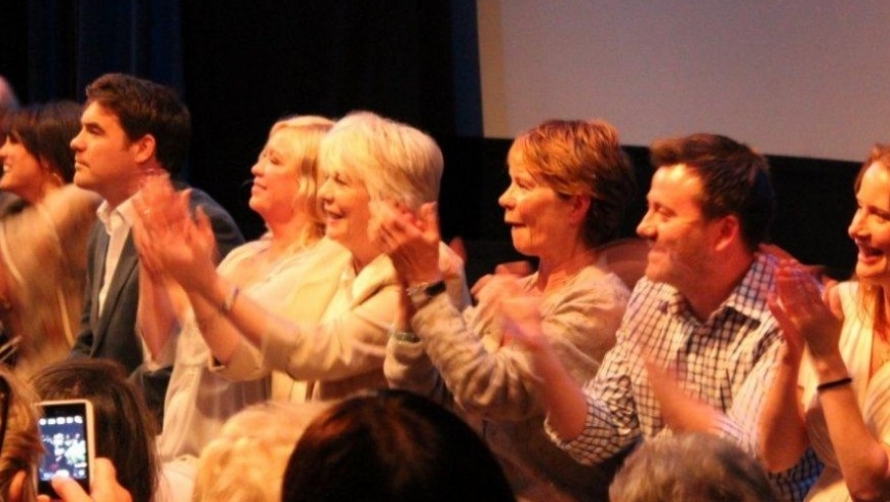 Last night, our cinema played host to a special, star-studded screening of Tiger Aspect’s new ITV comedy-drama Love and Marriage. The first episode of the show, which was filmed and set in Coventry, will be broadcast on ITV1 tonight.

Amongst the invited audience were Director Debbie Isitt (Nativity, Nativity 2), Writer Stewart Harcourt (Hearts and Bones, Jericho), Producer Lawrence Till and the majority of the series’ cast, including Larry Lamb and Alison Steadman (Gavin and Stacey), Celia Imrie (Calendar Girls, Best Exotic Marigold Hotel) in addition to many Coventry children, as several real-life brothers and sisters were cast as part of the on-screen families. Families of the young actors and other local people who had been involved with the series were also invited to watch the first episode, along with a trailer for the rest of the 6 part series.

The series follows the lives of the extended Paradise family, headed up by matriarch Pauline (Steadman), who finds herself at the end of her tether with her children who treat her like a bank, her unobservant husband and her free-spirited sister Rowan (Imrie). The first episode showed Pauline’s last day at work before her retirement, and the new life that she faces. There was much laughter and applause from the audience watching the impressive performances from the strong cast. Afterwards, an informal Q & A session was held, in which the actors and creatives thanked all the people from the area who had been involved, and director Debbie called her cast “the best actors working in Britain.”

Photos from the event are available in the gallery on the right hand side. Tune in to ITV at 9pm tonight to see the first episode!