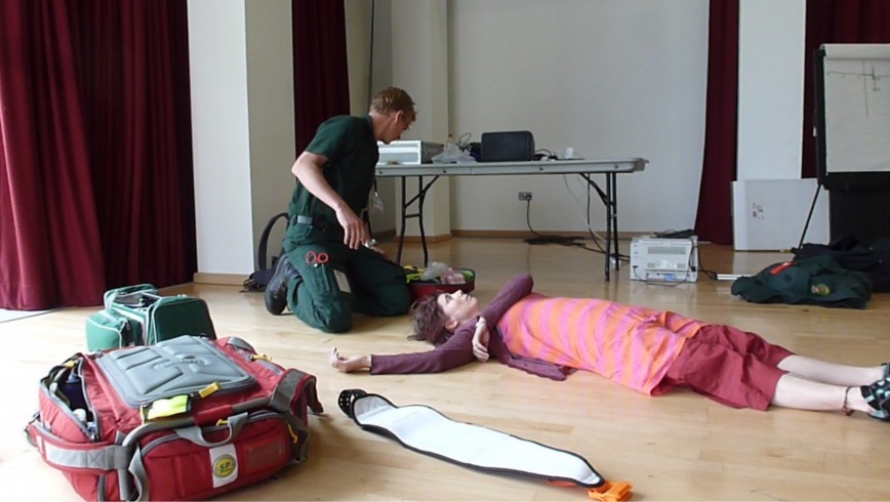 As part of Warwick Arts Centre’s Triggered@Warwick programme, the director Mark Murphy spent a week in R&D in our Helen Martin Studio, working through some ideas for a new show called Out of Body. Mark previously “triggered” his piece Take a Deep Breath here back in 2011, and below he talks us through the process of allowing new work to take shape.

I’m reporting back after our week of research and development at Warwick Arts Centre. With the support of WAC, Arts Council England, Creative Scotland and the Jerwood Charitable Foundation I was able to put together a crack team of creatives and spend a week in the luxurious Helen Martin Studio destruction testing the ideas that currently make up Out Of Body. The team were drawn from across the UK – Alex Palmer (story), Brigid MaCarthy-Charlton (movement), Claire Lamont (story), Diana Ennis (design) and Jon Clarke (producer) alongside two very special guests from Buenos Aries – my long time collaborators Joseph Traynor and Simone Jenkinson from Cuerda Producciones.

The week came hard on the heels of a month of R&D spent in Buenos Aries (care of Arts Council England) working on human flight in a theatrical context and it was these experiments that shaped the beginning of the WAC week as we discussed at length their implications for the new show. We went on to discuss what possible structure the new show might take and drew on a wide variety of reference material to both inspire and highlight the pitfalls. Alongside extensive model making and projection tests, we were thrilled to conclude the week by picking the action-packed brains of Dr. Nick Crombie FRCA DipIMC – Consultant Trauma Anaesthetist and clinical lead for the Midlands Air Ambulance.

On reflection I feel enormously privileged to have had the luxury of time with such talented artists in a truly supportive environment and although the results may not have the bells, whistles and visual fireworks normally associated with a week of my work, the benefits will help enormously in providing the key foundations as the show becomes a middle scale touring reality sometime in early 2015.

Out of Body is Triggered@Warwick, produced by BoldWorks and funded by Arts Council England, Creative Scotland and the Jerwood Charitable Foundation.