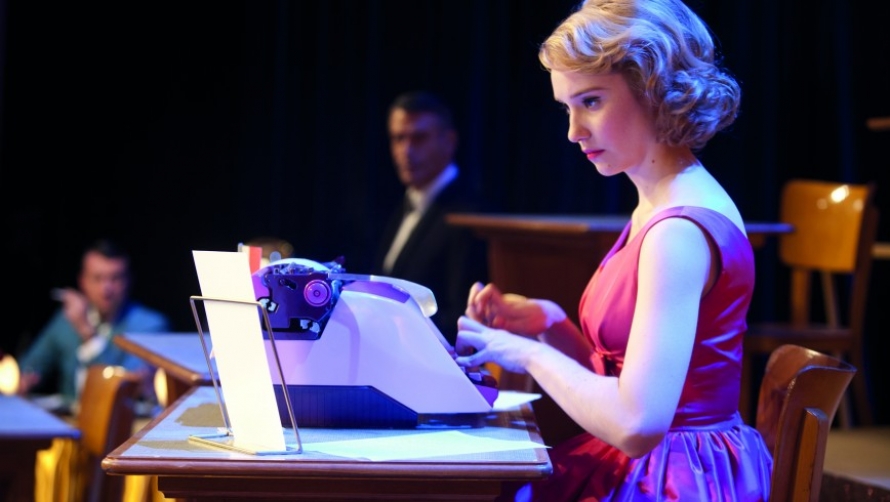 In a modern world where we are all accustomed to laptop keyboards and touch screen phones, a film based around typewriting tournaments may not sound too thrilling. However, I found myself on tenterhooks throughout, and at the end was in as much need of a massage as the speed-typing competitors themselves!

Populaire centres on the relationship between clumsy and sweet secretary Rose (Déborah François), and her knowingly handsome boss, Louis (Romain Duris). When Louis discovers Rose’s talent to type, he demands she compete in speed-typing competitions in order to keep her job. But she can’t just participate; she must win.

Prior to watching the film, the combination of typing and romance didn’t seem too well-matched, but I soon found myself getting drawn in by both the suspense of the competitions, and the teacher-pupil, or in fact coach-athlete partnership. Because typing in the 1950s is presented as a sport, and indeed becomes very competitive. As the competition host calls “fingers above keyboards”, the driven contestants look ready to pounce, and as they type they become “possessed by the machine”.

There are lots of laughs in this cute and quirky movie, and considering it is a subtitled film, the humour shines through the actors’ expressions. Particularly amusing moments are Rose’s drunken rant at Louis’ father, and her deliberately loud typing while Louis is on the phone.

While the storyline is predictable and at times slightly far-fetched, Populaire makes for a charming and entertaining night out that may have you longing for a go on an old-fashioned typewriter!