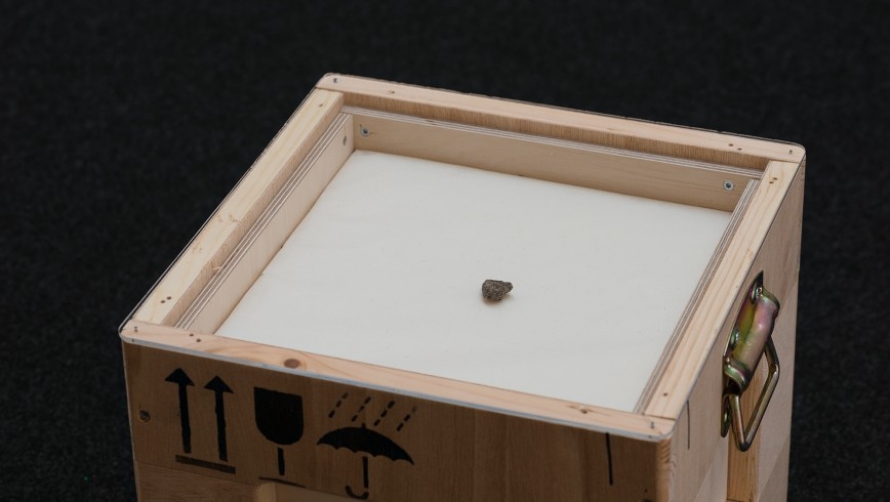 At 2pm on 8 September 2013, a new moon will begin a year-long orbit of the earth. Second Moon is the creation of artist Katie Paterson. A small shard of the moon will be launched as part of the British Science Festival 2013.

This particular moon’s orbit will, however, be man-made. UPS will collect the carefully packaged fragment of lunar rock from the Great North Museum in Newcastle upon Tyne and take it anti-clockwise across the UK, China, Australia and the USA at approximately twice the speed of our moon: over one year, Second Moon will orbit the earth 30 times.

A free app will become the real time portal to the geographies and topographies of the lunar meteorite’s journey, allowing the public to track its journey and visualise it in relation to the user’s location, the moon’s location and the orbits of the other planets in our solar system.

Viewers can also watch Second Moon’s progress on iPads and via projections in various public locations across the world, including Newcastle’s Great North Museum Planetarium.

Katie Paterson says: “I’m sending a shard of the moon which once fell to earth into a new orbit – creating a temporary, human-made moon which is both real and imaginary. It is an infinitesimal gesture that connects the galactic to the mundane, from customs hold-ups and airport regulations, to the 29 year orbit of Saturn and the shifting planets finely held together by gravity. People in different parts of the world will be able to imagine this new moon circling our planet, passing overhead through day and night. Our planet is one of billions of others; the universe may be swimming with moons. There are 166 natural satellites in our solar system, Phobos, Deimos, Io, Europa, Ganymede, Callisto, Kiviuq…Now we can look up to the sky and imagine one more, NWA 6721, Lunar Brecchia, earth’s Second Moon.”

The artist’s work constantly references intangible, natural phenomena, such as the moon. She combines sophisticated and totally mundane technologies to allow people to engage with the natural environment, collapsing the distance between us and the most distant edges of time and the cosmos by working with a whole range of specialists, be they astronomers, electrical engineers or amateur radio enthusiasts known as ‘moon-bouncers’.

In the past, Paterson has broadcast the sounds of a melting glacier live to visitors on mobile phones in an art gallery (Vatnajökull (the sound of)) 2008, transmitted Beethoven’s Moonlight Sonata to the moon and back (Earth-Moon-Earth) 2008 mapped all the dead stars known to humanity (All the Dead Stars) 2010, compiled a slide archive of the history of darkness across the ages (History of Darkness) 2011, custom-made a light bulb to simulate the experience of moonlight (Light bulb to Simulate Moonlight) 2009, and buried a nano-sized grain of sand deep within the Sahara desert (Inside this desert lies the tiniest grain of sand) 2011. Eliciting feelings of humility, wonder and melancholy akin to the experience of the Romantic sublime, Paterson’s work is at once understated in gesture and yet monumental in scope.

Second Moon is part of “Katie Paterson: In Another Time”, the largest and most ambitious exhibition of Paterson’s work to date, co-produced by the Mead Gallery with La Casa Encendida, Madrid and Yorkshire Sculpture Park. Brian Dillon, art critic and editor of Cabinet Magazine, says:

“The word ‘poetic’ is a treacherous one to apply to any artist, but Paterson’s is a poetry of knowledge and mystery, cosmicomically rendered…. Second Moon turns the circulation of heavenly bodies into mundane, everyday logistics or transport. Once again in Paterson’s work, the movement of metaphor is also a movement of return: physical or astrophysical fact becomes wondrously estranged but is brought succinctly down to earth. The work is ambitiously metaphorical and at the same time oddly literal.”

Produced by Locus+ with production support from Elmsly. App design by Fraser Muggeridge studios and Supermono.