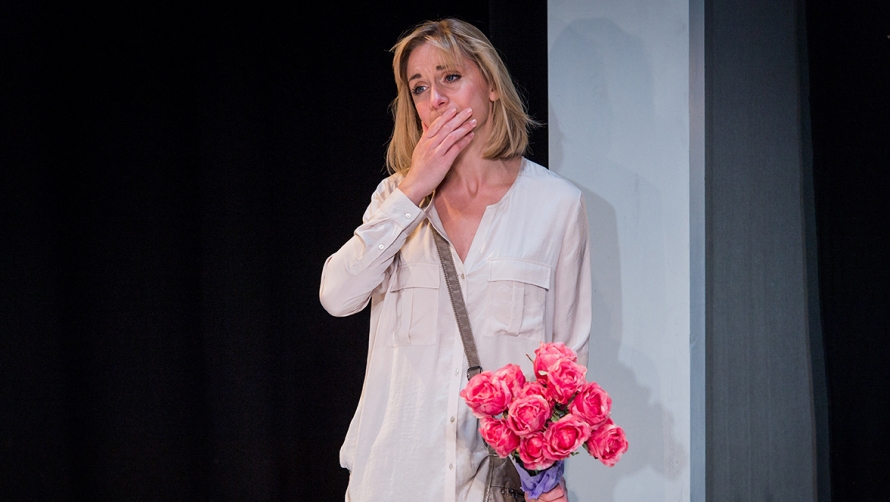 Artistically directed by the acclaimed Blanche McIntyre, Ciphers takes us through the journey of shy and reserved Justine as she becomes a secret agent in an attempt to establish herself as someone significant within society. Her sister is then left to stumble through a maze of lies and secrets to try and discover the truth of her sister’s hidden life.

The play allows us to peer through a window into the life of a secret agency revealing the dangers and excitement of this little known world. We witness how one person’s career can encroach on their personal life and begin to define who they are before destroying them completely. We follow a web of grappling and uneasy relationships throughout between family members, lovers and husband and wife, which are engaging and shocking at times. This intense non-linear narrative is laced with moments of light, relatable humour, making the battling relationships and the tense storyline much easier to digest.

The set was by far one of the most impressive aspects of the piece and brought a stylistic edge to accompany the actors as they switched between characters. The two white, sterile screens would slide across in front of the action revealing a completely new scene behind. This gave a sense of actors appearing and disappearing from supposedly nowhere, adding to the atmosphere of surveillance and of someone constantly being just round the corner. As the plot progressing as Justine finds herself increasingly in a more dangerous and vulnerable position.

This is award-winning playwright Dawn King’s second play after 2011’s acclaimed Foxfinder, and shows her flair for creating natural dialogue and generating suspense. This is a show not to be missed as it leaves the audience questioning the current state of espionage in our society.

Ciphers is on at Warwick Arts Centre until Sat 23 Nov. £6 tickets are available to University of Warwick and Coventry University students.