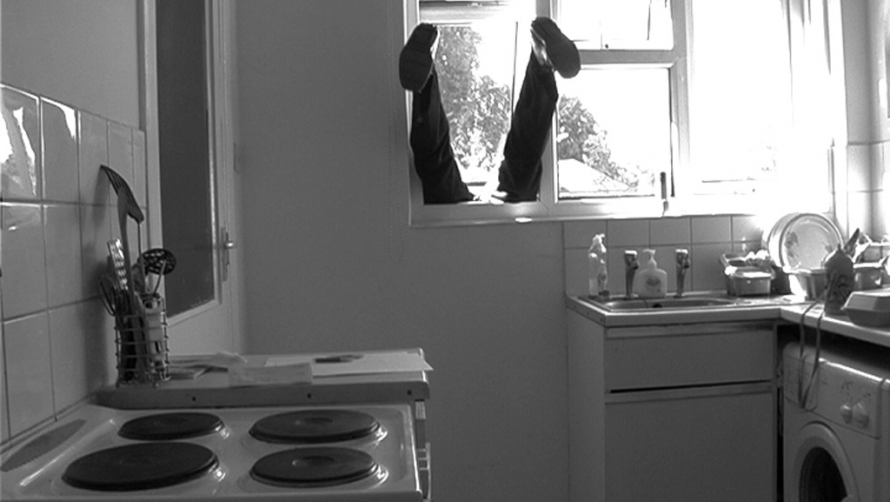 Having visited The World Turned Upside Down, a fantastic exhibition currently being held at the Mead Gallery, I couldn’t wait to attend the related weekend, Fail Better – Deconstructing Buster Keaton.

On Saturday, a series of talks and performances took place, including Buster Keaton and the Logic of Objects. Peter Krämer was first on the programme, and his talk delivered a fundamental outline of the Stone-faced Comedian and his work. I found the fact that Keaton changed his name to Buster to reflect the risk-taking element of his work especially interesting. I also particularly enjoyed the talk, Keaton and the 2nd Law of Thermodynamics by Simon Faithfull, co-curator of the exhibition The World Turned Upside Down. Simon explained the 2nd law of thermodynamics in terms of entropy, which put very simply is the idea that things tend towards chaos. He innovatively links this idea to our existence, which he describes as paradoxical, as we continue to create things even though they are destined to self-destruct. Our attempts to create are, ultimately, destined to fail. He noted that Keaton’s characters are victims of entropy; they are victims of the way that things fall apart. Although, as humans, we are destined to fail, we can, like Keaton, fail better – we can create something great out of this failure. As Beckett once said, we should try again, fail again, fail better.

The weekend culminated with screenings of Keaton’s The Railrodder and Eric Sykes’ The Plank. I was pleasantly surprised by The Railrodder’s eccentricity and wit. There were also some characteristically nail-biting moments where Keaton’s life was at risk, which had me on the edge of my seat. The Plank was full of chucklebrother-style slapstick humour which had me, and the rest of the audience, laughing out loud.

All in all, the weekend was incredibly insightful and has left me with a new found passion for Buster Keaton’s films!

You can visit The World Turned Upside Down – Buster Keaton, Sculpture and the Absurd exhibition in the Mead Gallery for FREE until Sat 14 Dec 2013, open Mon-Sat, 12 noon – 9pm. Also open Sun 1 Dec.