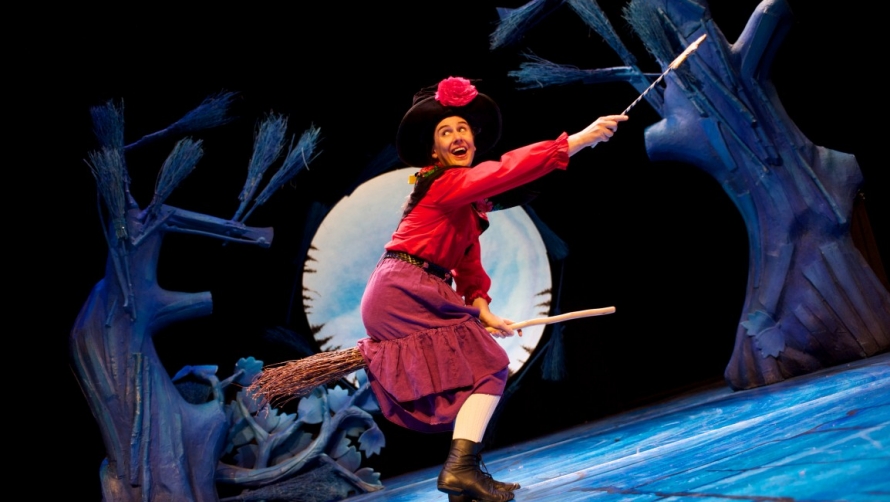 Fiona Putnam plays Witch in this year’s Christmas show, Room on the Broom. Fiona grew up in Leamington Spa and so we caught up with her in between shows to ask her about escaping dragons back in her native Warwickshire.

“I grew up with a very dynamic local theatre company called Playbox and we used to perform our shows at Warwick Arts Centre in the studio. So for me this is a very cyclical thing – I’ve come back to where I started performing in the first place! My parents don’t live in the area anymore but all my friends are coming back for Christmas and coming to see the show with their kids, so it’s really great to be back.

“Being in Playbox was such a great opportunity. We got to perform here and at The Swan in Stratford – we went to Tokyo, to LA, and had that feeling of being a proper performer in a professional venue, all before I went to university.”

What was Fiona’s first role that she can remember? “Puck in a Midsummer Night’s Dream, I think. I started off as a guard in the background, and was promoted to Puck because the original got glandular fever! I was very excited…!

“Playbox got me into physical theatre – and that’s why I really love doing this show. There’s not a moment really where the kids [in the audience] just switch off because it is so physical. Playbox was the starting point for me, I suppose – from there I went Hull University and did drama. I came back to London for a few years, trying to earn some money. I was working in Battersea Arts Centre as part of their young people’s theatre, and people were saying to me that I should audition for drama schools. So I went to Drama Studio London and I’ve been performing professionally for 9 or 10 years now.”

Fiona has appeared in several other children’s productions, including Charlie and Lola at Polka and The Enormous Turnip for Stuff and Nonsense. She also toured with Room on the Broom throughout the USA in 2011. What attracts her to children’s theatre?

“I think children’s theatre is more prepared to take risks and is more inventive. About five years ago, I decided to go back to what I trained in, which is physical theatre. I saw a lot of shows – and Room on the Broom was one of them – and I didn’t realy think of them as children’s theatre, I just saw them as physical theatre and I wanted to be doing it. With the company I run with my husband, Infinite Jest, we do 1 hour Shakespeare for kids; I just really enjoy seeing kids react so honestly to theatre. They say it how it is – it forces you to create theatre that’s not boring! But next year, I’m doing Dancing at Lughnasa at Keswick theatre, and that’s quite exciting as well.”

And why does she think the show has been so successful?

“The book is the draw, but this company has a real talent for fleshing out stories. The kids can understand that actually the witches is pretty mean to the cat – until she’s gone, and then she realises what she’s missed. That’s a story everyone can relate to. It’s also the unique way of telling the story – it’s very physical, with songs and music and dance. It’s a very three dimensional adaptation and I think parents and teachers are surprised by that and delighted, actually.

“The weekends are fantastic here – people are just up for it. They’ve already invested in the magic, they want to be there – and then we just sock it to ‘em, I hope!”