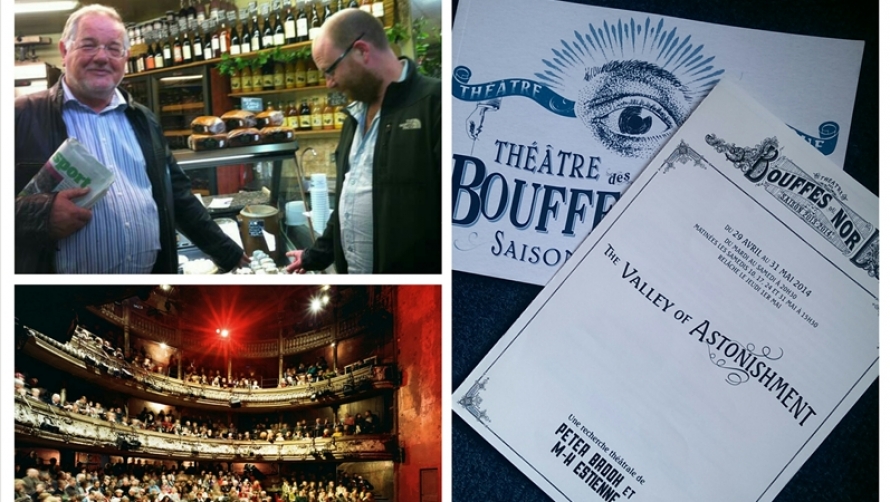 Arts Centre Director Alan Rivett, Head of Programme and Audiences Matt Burman & Marketing Director Katie Anderson took a trip to Paris on 30 Apr to see Peter Brook’s The Valley of Astonishment ahead of our UK Premiere on in June. Here’s Katie’s report…

Within half a mile of the Eurostar terminus at the Paris Gare du Nord station stands the Theatre du Bouffes du Nord, its façade still glowing with the faded grandeur of an old lyric theatre in a gritty suburb of north Paris, surrounded by halal butchers, sari shops and afro hair designers.

For nearly 40 years this has been home to seminal British theatre director Peter Brook. Alan, Matt and I were lucky enough to pop over on Eurostar for one of the opening nights of The Valley of Astonishment that has been co-commissioned by Warwick Arts Centre and comes to us its UK premiere on Wed 11 Jun.

Now aged 89, and retired as Artistic Director (though he still turns up at the theatre most days) the theatrical legend’s new work for the Bouffes, The Valley of Astonishment, is the story of Sammy Costa, a journalist played by the mesmerising actor Kathryn Hunter, whose boss notices her amazing memory and promptly sacks her as an act of kindness and the play tells the story of her journey therein.

The condition she has is synaesthesia, a phenomenon that means she associates memories with objects, pictures or locations. From being studied by medical researchers she joins a magician, her remarkable powers of memory wowing audiences. But in the frenzy of nightly sideshow performance she becomes an object of entertainment and Sammy begins to express her frustration as she loses her identity. In lessening her own ‘phenomenon’ only then can she reach a sense of her own being.

Not dissimilar thematically to Kafka’s Monkey, which was enjoyed by many people at the Arts Centre a couple of years ago, this is another tour-de-force performance by Kathryn Hunter, accompanied by her real-life partner Marcello Magni, Jared McNeill and 2 musicians, including Toshi Tsuchitori, a Brook stalwart, who was seen in many of Brook’s previous works.

Stripping down of non-essentials and finding spiritual enlightenment is a theme of many of Peter Brook’s productions, and fans of the director’s work will see it references one in particular of his earlier productions, Je Suis un Phenomene, It is also directly influenced by the works of people like Dr Oliver Sacks and pre-eminent British neuro-scientist Simon Baron-Cohen.

Existentialism aside, in these days of constant distractions, this is an hour and ten minutes of sublime meditative study, away from the chaotic business of life – a must-see for anyone interested in spirituality, in philosophy, in thought, in performance. Apart from anything else, for anyone who loves theatre, this is a rare chance to see a Master theatre director at work, in a culmination of his life’s endeavours. A little bit of Paris comes to Coventry.