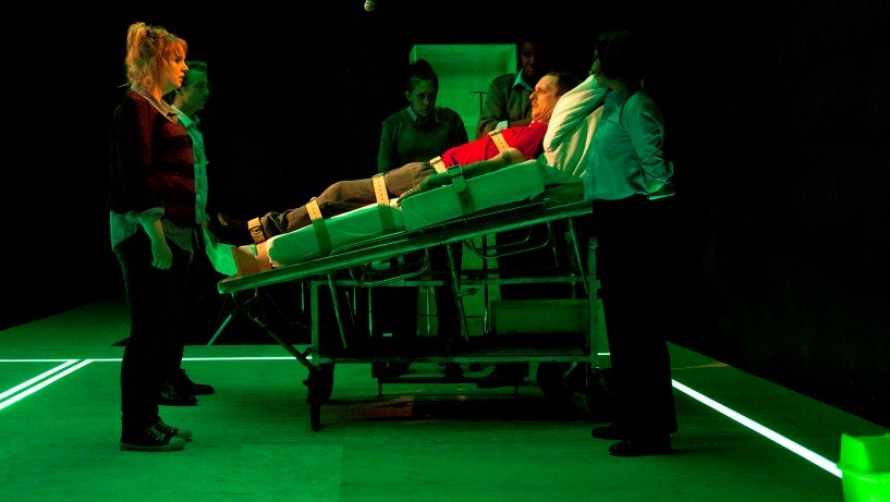 On entering the Warwick Arts Centre Theatre to watch Chamber Piece, what struck me immediately was the set. A simple layout with strips of lighting on the floor outlining two scenes on the stage, one of red plastic chairs in rows, all pointed towards the other area, a bed covered in straps and needles hanging like Christmas trees from racks. The bland decor, with details such as a sharps bin near the needles and fluorescent bar lighting above the stage, set an imposing yet familiar, clinical scene. Kudos must be given to the set and lighting designers (Paul Wills and Lizzie Powell) on making such a simple yet visually rich set – the lighting continued to wow the audience and enhance the staging, which itself was versatile in a very pleasing way to the audience.

The play starts a little slowly; it doesn’t prepare you well for the intense pace of the performance. Thankfully the playwright (Caroline Bird) takes her time in revealing tidbits of information to the audience about not only the story but the slightly-into-the-future dystopian society, where British society mimics American and invokes the death penalty, gets rid of the NHS and offers convicts to work off their prison sentences by working in lethal injection chambers.

The story itself is strong, questions of ethics never seem to be far from the capital punishment but the idea of amnesia striking at the time of execution, and therefore killing a man who can’t remember committing his crimes was especially interesting. It also forces the audience to question their opinions on characters, revealing one to be much less innocent than perceived, but only after his death.

The two halves of the stage interact with each other brilliantly during the first act. The transitions between acts was fantastic, the severity of the closing lines and situation suddenly washed away by deep red lights and the Governor (Cara Horgan) becoming visibly more frustrated and tired, as she is left to do the moving of furniture herself – flinging a dozen chairs to the side of the stage, lugging tables and chairs, even practically doubling over to push the inmate on his bed of straps, all to the chirpy tunes of the Jackson 5.

The cast were brilliant, some more natural on stage than others, but all showed an enthusiasm and great commitment to their roles. The particular stand outs were Hammed Animashaun as Warden Alex, Cara Horgan as the Governor, Steven Webb as the Physician, and the stand-out actor of the play, who stole the show in the third act, Leo Bill as Richard Sanger. His monologue blew away not only me but the rest of the audience, who were visually disturbed by his rant as a moral-less murderer – his literal breaking of the fourth wall by coming and speaking (shouting) from the audience and sitting in an empty seat was phenomenal.

The ending was great, some attempts at rounding up every character’s plot felt a little forced, but overall it was a very well written play, which benefited from some amazing actors. I thoroughly enjoyed it, and would urge others to see it!

Interested in reading what somebody else has to say? Check out STARS Reviewer Thomas Bray’s thoughts on the same piece.