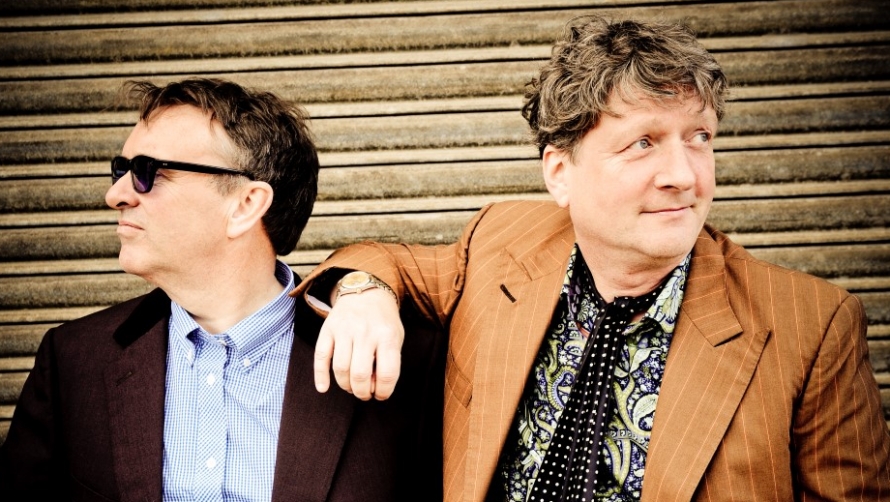 The Butterworth Hall is always a great venue for a concert – it’s small enough to feel intimate but big enough to have plenty of atmosphere. Tonight it’s nearly full for the visit of the two front men from Squeeze on the last night of their At Odds Couple Tour. I first saw them at Lancaster University in 1982 when both the weather and the band seemed curiously frosty on a cold October night, so I was hoping for a warmer welcome this time around – and happily, they didn’t disappoint!

The stage was laid out as a 70’s-style bed-sit. Garish orange and black wallpaper framed a double bed, flanked by the breakfast table, an armchair and a few scattered side tables (and even an old hoover…nice touch!). On the tables were two disembodied plastic heads (possibly Glenn and Chris lookalikes?) and an old bike horn.. but more of these later…

The evening begins with Chris and Glenn taking to the bed, as a sizeable screen above springs into life showing a spinning 1973-vintage 50p piece –The Coin lands and a phone by the bed rings.. a reference to an old story that Chris (allegedly) stole 50p to place an advert advertising his band which Glenn answered, leading to the formation of Squeeze in 1974. The screen plays videos throughout the set, showing the band’s history and adding an often light-hearted accompaniment to the songs (was that really Chris on the set of Babeworld?!)…

Our two heroes jump from the bed in rather fetching blue and red pyjamas; Glenn sporting a long nightcap, which adds a slightly Laurel and Hardy touch. They launch straight into Take Me I’m Yours and sound fantastic, with Glenn’s cherubic vocals swirling confidently above Chris’s gravel foundations.

The night is a true pleasure, with all the hits joyfully covered, liberally sprinkled with a few new songs. They cover keyboards and guitars between them, playing individually and together as the night progresses. There is no band, but who needs drums when you have an infectious sound and a tapping foot!? Glenn is a hugely under-rated guitarist and there are dextrous solos throughout, giving an occasional almost Buddy Holly-esque feel to proceedings.

The songs are sporadically interrupted by The Man in The Golden Cape, who wanders around the audience with a microphone, giving people the chance to ask the lads questions about.. well, anything really. The answers are spontaneous, relaxed and often funny – a particular favourite of mine being Chris laconically deciding that the song he most wished he’d written was “The Stripper”… hmmmm….

Their bitter-sweet poetry of the street adds to a relaxed, comfortable and confident performance and the standing ovation after an exuberant encore of ‘Goodbye Girl’ is heartfelt and deserved.

They are back on TV next year, playing weekly in Danny Baker’s new Comedy Show entitled Cradle To Grave and frankly, I can’t wait!

Take me I’m yours
Coffee in Bed
Slaughtered, Gutted & Heartbroken
Half Way
Is that Love
The beautiful Game
Some Fantastic Place
Wrecked by all possible means
Cowboys are my weakness
Up the Junction