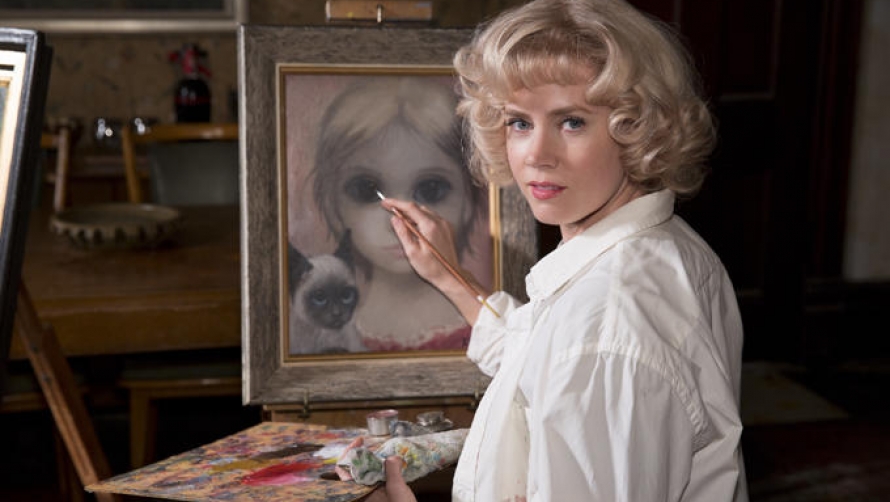 If you thought you knew the range of characters Amy Adams and Christoph Waltz from their previous respective filmographies, you most probably thought wrong. Both actors turn in stellar performances in Big Eyes, the biopic of artist Margaret Keane, whose husband claimed credit for her work in the 1950s and 1960s.

We first meet Margret (Adams) when she runs away from her husband at the time with her young daughter. She has a passion for painting portraits of young children, with the unusual feature being their exceptionally large eyes. While trying to make some money out of her talent, she meets Walter (Waltz), whom she marries after a whirlwind romance. While Margaret is painfully shy and has difficulty expressing herself if not through her artwork, Walter is the polar opposite, enabling him to innocently take credit for one of her paintings when she is lost for words after it receives a compliment.

Walter’s deception builds and builds until he becomes world famous for his depictions of the melancholy infants. And while Walter is the face of the partnership, Margaret remains the quiet creative force, churning out painting after painting, practically to order. She lives a solitary life to the point where she has no friends whatsoever. Margaret is dazzled by the glare her husband’s ambition and evolves throughout the film into a figure as sullen as one of her own wide-eyed waifs. Like them, her hollow eyes showing the strain of her existence.

Amy Adams turns in an outstanding performance as the downtrodden Margaret, barely audible in her rare interactions with people. It is easy to see why she initially falls for Walter, but as he grows to unleash his charming menace on her, the audience wills her to stand up for herself, which she eventually does with aplomb. Waltz’s comic take on Walter’s humiliating fall from grace is a joy to watch and ultimately shows him up as the pathetic individual he is. Meanwhile, Margaret’s steely determination to be recognised as the true creator of her work leads us to an admirable and satisfying conclusion where her eyes, like those of her subjects, are opened wide.

Not a typical Tim Burton film, Big Eyes nonetheless delivers where it needs to. Each scene oozes the contemporary feel of the 50 s and 60s and stylistically; it’s a treat. It’s fitting that a film about art should create such intimate portraits of its protagonists. If you’re looking for a film with bags of fast-paced action scenes then this won’t be for you but if you want a cast who create characters who aim straight for the heart; this film delivers in abundance.