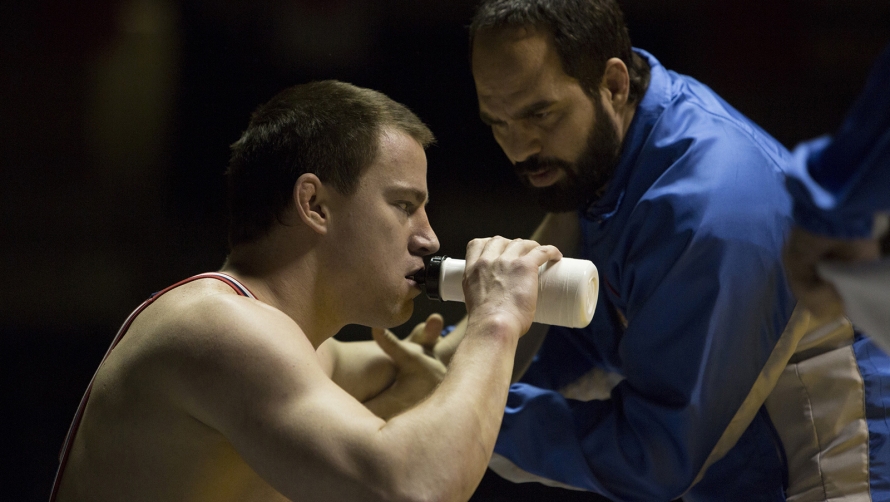 Foxcatcher is a film loosely based on the true story of John du Pont (Steve Carell) and his desire to work closely with 1984 Olympic gold medal winning Mark Shultz and his older brother Dave (Channing Tatum and Mark Ruffalo respectively) in training a team of wrestlers for the 1988 Seoul Olympics. Du Pont comes from a very wealthy family and invites Mark to come and live and train with him at their estate – Foxcatcher. His very elderly mother Jean (Vanessa Redgrave) is still alive. His need to impress and placate her borders at times on the obsessive, just as much as his desire to see ‘Team Foxcatcher’ succeed slowly destroys him. Carell, carrying a few additional pounds and sporting a prosthetic aquiline nose, is virtually unrecognisable and gives an immensely powerful performance as du Pont, winning him a thoroughly deserved Best Actor Academy Award nomination.

Ruffalo just edged out Tatum for a Best Supporting Actor nomination; perhaps disappointing when you consider the significant difference in their screen time. Dave is more reluctant to move to the du Pont estate due to his family commitments, and thus spends much of the film away from the action while du Pont repeatedly tries to persuade him to join his brother. Tatum arguably gives his best performance to date, Mark Shultz’s grit and determination to be the best in his field oozing out of the screen. His self-destructive behaviour after performing poorly and being defeated in a qualifying bout shows just how difficult it is for him to deal with his failures, reacting with self-loathing and violence rather than concentrating on how to fix the situation. Shultz and du Pont are not equally matched in wealth and status, but both are extremely lonely figures who have had few friends, if any, in their lifetime. This is perhaps why Shultz is so easily led by du Pont, falling under his influence quickly and completely.

The whole ambience of the film is perfectly pitched, with each shot having a dull sheen, making it as colourless as du Pont’s life. The action scenes are well-placed and sparse, and the one-on-one training sessions are suitably intense. The film’s biggest strength, however, lies in the interactions between the characters. There are frequent moments of roaring silence, particularly when du Pont is communicating with Shultz. This does nothing to affect the pace of the film, as the scenes of reticence make for purposefully uncomfortable viewing. The audience never know how du Pont is going to react; his unpredictability being an integral facet of the character. Carell plays him like a Bond villain without the clichés, flitting between invoking pathos and anger towards this complex figure.

The film demands the attention of its audience, and at the screening I attended, you could have heard a pin drop throughout. The characters unravel themselves throughout the movie, leading to its ultimately shocking and tragic conclusion.