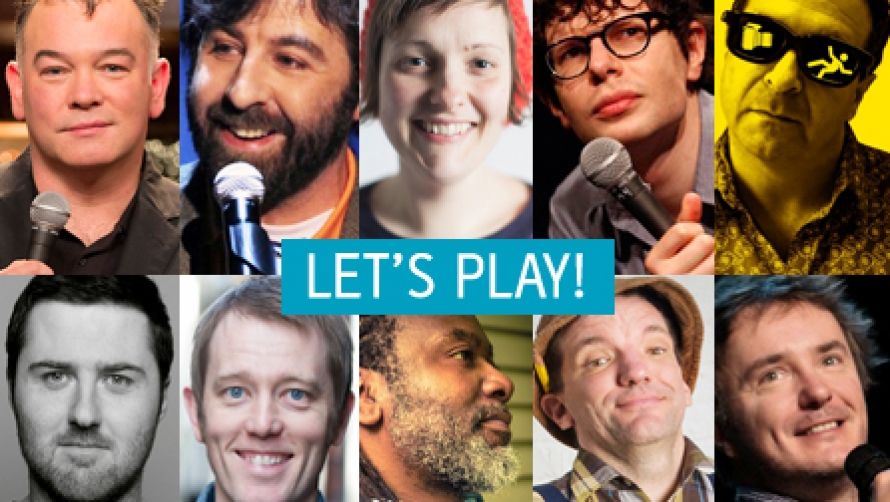 Banish those wintery blues with some great big belly laughs!

Take our Comedy Quiz (below) and see which of our upcoming shows you’re matched to. Once you’ve done that, have a look at our Comedy Quick Guide to find out more about them. So if you like what you read, see them here, in a live intimate environment before they hit the big-time and embark on expensive arena tours!

“The UK has one of the most lively, thriving and creative comedy scenes and it’s all here under one roof at Warwick Arts Centre. We continue to celebrate our 40th anniversary year with the biggest comedy names in the business including Dara O Briain and Alan Carr alongside a host of our favorites returning such as David O’Doherty, Jo Caulfield and Stephen K Amos. Rising stars of stand-up include Lloyd Langford and a very special show with Josie Long, not to be missed! It’s all here – it’s all for you!”

South Yorkshire’s synth star. A seaside, end-of-the-pier style entertainer from the good old days.
“His stand up is second to none, his timing is impeccable, and you can practically warm your hands on his good nature” The Guardian
For fans of: Frank Sidebottom, Reeves & Mortimer, Count Arthur Strong, David O’Doherty.
Watch a clip
Buy tickets here

A charming social commentator and all round entertainer.
“Right now, the Iranian Djalili is probably one of the most subversive, let alone funniest, comedians around” The Guardian
For fans of: Al Murray, Jack Dee, Stephen K Amos.
Watch a clip
Buy tickets here LIMITED AVAILABILITY

Low-fi comedy and offbeat songs played on a miniature keyboard by this Perrier award winner.
“He carries on honing his reputation as a true original of the live scene” The Guardian
For fans of: Stewart Lee, Bill Bailey, Lee Mack.
Watch a clip
Buy tickets here

The master of feel-good comedy.
“Uplifting stand-up from a charming performer” Time Out
For fans of: Omid Djalili, Andy Parsons.
Watch a clip
Buy tickets here

Razor sharp wit from this regular panelist on Mock the Week and Have I Got News For You and star of her own Radio 4 show.
“Many of the points Jo Caulfield makes about the human condition would have sociologists stroking their beards in admiration, but her audiences tend to be laughing too much to notice” The Times.
For fans of: Andy Parsons, Holly Walsh, Zoe Lyons
Watch a clip
Buy tickets here

Deep neuroses and painful introspection from the critically acclaimed stand-up.
“Existential questions with belly laughs…Comedy is rarely as smart or adventurous as this” ★★★★ Chortle
For fans of: Dylan Moran, Mark Watson
Watch a clip
Buy tickets here LIMITED AVAILABILITY

Intelligent and absurd, this comedian is best known for hosting Mock The Week.
“If you want a comic who can hold an audience in the palm of his hand for two hours, here’s your man” The Times
For fans of: Jon Richardson, Ed Byrne, Phill Jupitus
Watch a clip
Buy tickets here LIMITED AVAILABILITY

A former variety star who has malapropisms, memory loss and other similar problems. Based on the hit radio series Count Arthur Strong’s Radio Show!.
For fans of: Vic Reeves and Bob Mortimer, The Fast Show, Bottom.
Watch a clip
Buy tickets here

Actor Miles Allen performs what‘s described as “a love letter” for Breaking Bad fans.
“Miles Allen is a supreme entertainer … he nail impressions of pretty much every character in the series … a high-tempo, laugh out loud, beautifully executed homage to one of the best TV shows of our generation” ★★★★★ What’s On Stage
For fans of: One Man Star Wars, Breaking bad
Watch a clip
Buy tickets here LIMITED AVAILABILITY