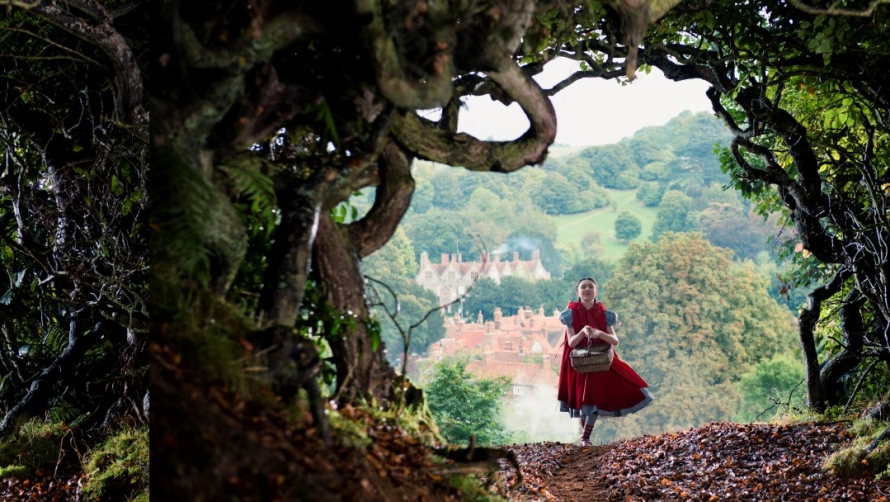 If you go down to the woods today, you’re sure of a big surprise…. Or at least you are if you were expecting this movie to be a typical saccharine Disney romp through several well-loved fairy tales. For this is a big screen adaptation of the Stephen Sondheim musical and is not necessarily reflective of its child-enticing trailer and subject matter.

Sondheim is not the most accessible composer and lyrics are often sung without an accompanying score (if you saw the recent big screen adaptation of Les Misérables then you’ll be familiar). At the screening I saw, there were several sets of parents present with very small children who got very bored very quickly and ended up leaving before the end of the film as the children were getting so restless. That said, for slightly older children, the film may serve as an excellent introduction to musical theatre due to its familiar storybook content.

A baker (James Corden) and his wife (a surprisingly excellent Emily Blunt) are longing to have a child. The arrival of a witch (Meryl Streep) explains that they have been cursed never to have children unless they help her to break a spell. They are thus sent on a mission to retrieve four essential items for her from nearby residents, all of whom are characters in their own respective fairy tales. There’s Cinderella (Anna Kendrick, promoted to the movie musical big league after her hugely successful performance in Pitch Perfect), Jack (Daniel Huttlestone) and his beanstalk, Little Red Riding Hood (Lilla Crawford) and Rapunzel (Mackenzie Mauzy). It’s quite an all-star ensemble, featuring cameos from established actors such as Tracey Ullman, Frances de la Tour, Chris Pine, Christine Baranski (a movie musical regular, having appeared in both Chicago and Mamma Mia!) and Johnny Depp, as the Wolf. Depp features heavily in the trailer as a star name to draw audiences in, but his blink-and-you’ll-miss-it appearance may leave dedicated Depp fans feeling a little cheated.

During the promotion of the film, the actors have described the plot as showing what happens after “Happy Ever After”. To some extent this is true, as each individual fairy tale is seen through to its traditional conclusion but is then later complicated by the quest of the baker and his wife. They predictably work together to satisfy the witch’s demands and the resulting spell restores her to her youthful self. A happy ending? Well no, actually. The characters each in turn begin to doubt their circumstances and slowly, their lives are ruined. It’s a rather bleak outlook to what is presented as such a traditional story in the misleading trailer, but if you’re familiar with Sondheim’s work this this will be far from surprising.

This film will most probably divide audiences straight down the line depending on their expectations. Musical theatre fans will delight in seeing the creation of one of the most successful composers of our time brought alive on the screen by Rob Marshall (who also directed the hugely successful Chicago movie). However, families expecting a traditional presentation of classic stories will most probably be bitterly disappointed. Despite a talented bunch of young performers in lead roles, it’s the more established talent which shines through. James Corden takes further steps into the mainstream with a strong performance although is outshone by his onscreen wife, Emily Blunt, who shows both an emotional and vocal range which is unexpected if we judge her on past merits. Meryl Streep typically steals every scene she’s in but although her character is an obvious highlight, it could be suggested that it is not deserving of the Academy Award nomination she has received and that the Academy is now determined to give her recognition as a matter of course to honour her outstanding talent when there are arguably many equally strong performances deserving of a nod this year.

So don’t expect anything. Watch, enjoy, absorb, and then make your mind up how you feel. You’ll undoubtedly have strong opinions, whichever way the fairy dust blows.