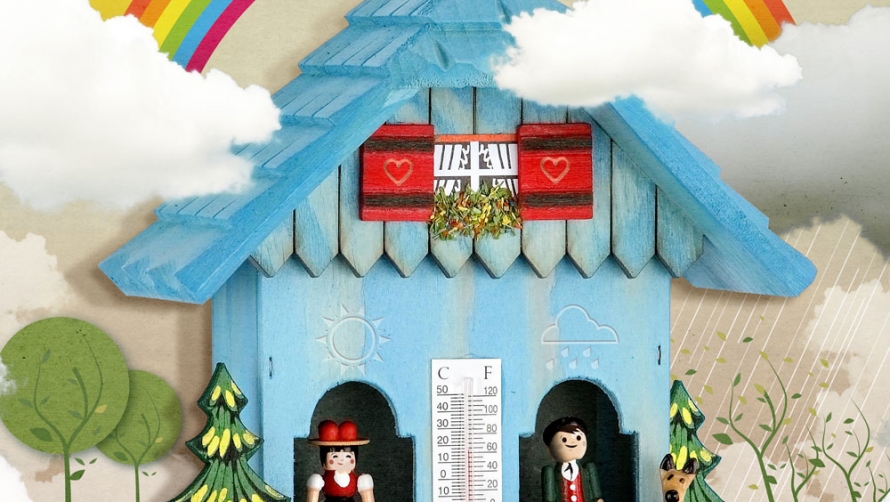 This delightful and engaging 50-minute production is aimed at children aged 3-7, and focuses on the story of Mr Rain and Mrs Sunshine, who live side by side in a traditional Alpine weather house. When the heavens open, out ventures Mr Rain, but when the skies clear and the sun creeps through, he must retreat to make way for Mrs Sunshine. Side by side, but never together, the two characters tell a story of turn-taking and empathy, as seen through the eyes of the very young.

Children and grown-ups alike were captivated from the off by the colourful and imaginative set, drawn in by the quaint blue wooden weather house, adorable fluffy chicks, and the slightly bemused-looking deer. As the play began, the audience watched eagerly as Mr Rain and Mrs Sunshine took it in turns to tend to the weather house and gardens, taking care of the deer and chicks, and organising their day based on current weather conditions.

As the story progressed, we saw Mr Rain and Mrs Sunshine becoming increasingly angry with each other and unable to accept how the other one looked after the chicks, the deer and the gardens. The storyline explored beautifully the way that young children struggle to cope with turn taking and compromise and also linked cleverly and seamlessly with taught themes from the Early Years Foundation Stage (EYFS), which is followed by childcare settings and schools up to the age of five.

At one stage, Mr Rain angrily discovered that Mrs Sunshine had broken the house drainpipe and so decided to improvise with tubes, containers of various sizes and the drainpipe to construct a makeshift gutter to drain away the rain. Without speaking a word, he showed the children how large containers can hold more water than small containers and also encouraged my five year to question why water can’t flow uphill, “It won’t work if Mr Rain puts the drainpipe that way, because water can’t go up a hill. Why can’t water go up a hill, Mummy?”

As the play reached its climax, the two characters acted out what can only be described as a tantrum, throwing each other’s possessions around the set in anger. And then the heady mixture of rain and sun produced a glistening rainbow, and the characters gradually began to realise that if they worked together and accepted each other’s quirky little ways, they could live as one and enjoy a peaceful, happy life, ‘Whatever the Weather’.

It is something of a pity that some of today’s grown-ups never had the chance to see this play and the life lessons it explores, when they were children…