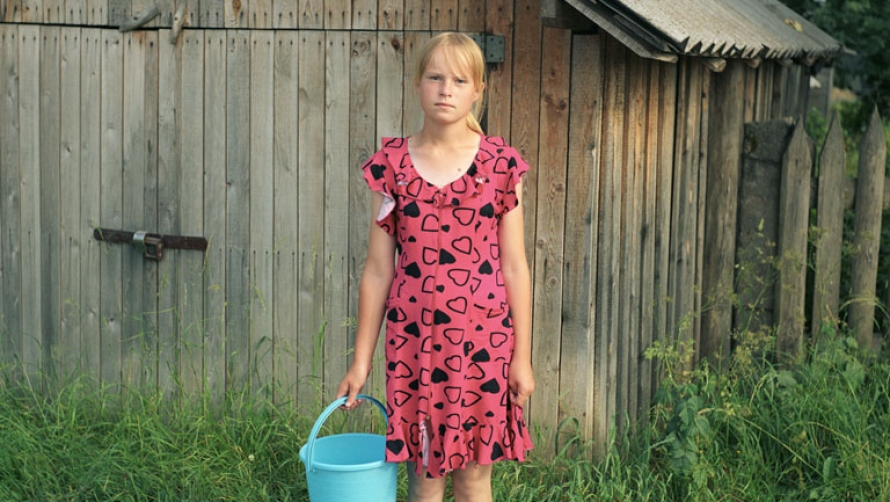 Almost dead in the centre of Alexander Gronsky’s Reconstruction, a soldier is caught at the moment of impact, his contorted body falling to the snowy ground. At first glance, it looks like a snapshot from the heart of battle, but the immaculate composition and the spectators huddling at the side of the frame remind us that this is just men, playing, albeit earnestly, at war.

Reconstruction is one of the stand-out pieces in the Mead Gallery’s latest first-rate exhibition, a collection of Russian photography entitled Close and Far. The gathered works, from three photographers and two video-artists, depict a country simultaneously undergoing rapid change and clinging onto the vestiges of well-weathered traditions. Alongside these contemporary contributions is placed the curious collection of Sergei Prokudin-Gorsky, an early-twentieth-century nobleman commissioned by Tsar Nicholas II to capture the country in colour. Selections from this vast survey sit at the centre of the gallery, each shot a window into a world now largely lost. Together they make for a compelling record of Prokudin-Gorsky’s voyage through pre-war Russia.

The tone of Prokun-Gorksky’s project finds an ancestor in Max Sher’s attempts to capture for posterity the anonymous-looking urban shopping centres and government buildings of Russia’s urban landscapes; the subject, meanwhile, is echoed in Olya Ivanova’s 2010 study of a northern village, Kich-Gorodok, with its muted yet intimate records of rural life. Taus Makhacheva’s video-piece, a considered exploration of the Russian landscape today, evokes something of Prokudin-Gorsky’s discovery of this great hinterland.

It is, however, Gronsky’s photography and Dimitri Venkov’s film, Mad Mimes, which steal the exhibition. Mad Mimes, a mockumentary about a band of misfits scrapping by on the edge of the Moscow Ring Road, is a fascinating idea brilliantly executed, the bizarre antics of the characters hilariously off-set by the attempts of po-faced experts to understand them. Meanwhile, Gronsky’s intricate panoramas of Russians working and playing in the shadow of Soviet-era industry are nothing less than breath-taking. Presented as triptychs, they demand repeat viewing, and each time offer some new detail.

Close and Far is another example in a long line of excellent photography at the Mead. The exhibition is FREE and open Mon – Sat 12pm – 9pm until Sat 7 March. Please click here for more details.