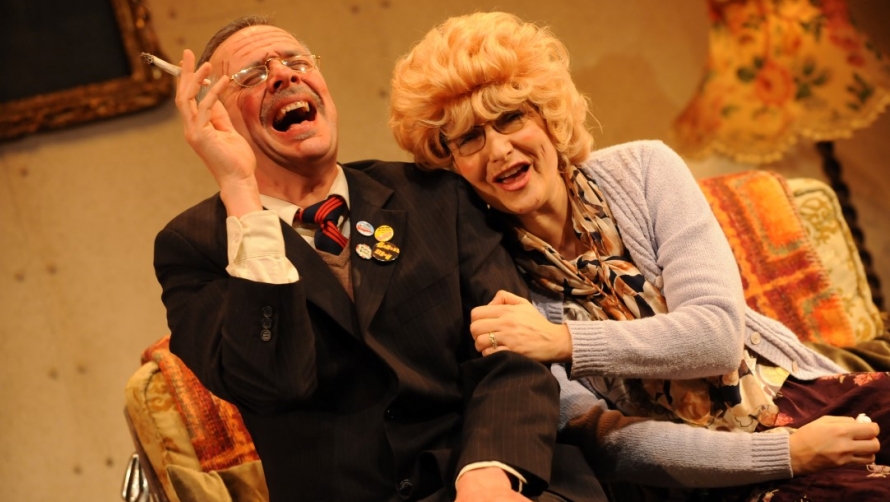 Welcome to the Warwick Arts Centre Home for Aging Thespians, located, in a move which crumbles the fourth wall, in the Warwick Arts Centre theatre. Here we are ushered into the mundane mayhem of six aging actors and their carer Sister George, an unlikely compound of Nurse Ratched and Jessica Rabbit. Over the course of the show, we join these former thespians in their attempts to cling onto the stardom which they once enjoyed, and, with a little help from Shakespeare, Kurt Cobain and Bob Dylan (to name a few), it makes for quite the treat.

The standout feature of Forever Young is, without a doubt, the music. Sometimes used as a careful comment on the characters and their stories, sometimes a bemusing non sequitur used to blindside the audience, there is an abundance of vocal talent sinking into the armchairs on stage. A surprise incident with a false leg leads into a haunting rendition of Aqua’s Barbie Girl, while experiments with illicit drugs result in a seamless medley of sixties classics. Renditions of I Will Survive and the eponymous Forever Young, meanwhile, take on extra significance when performed by those looking back on a life in the limelight.

With the songs coming thick and fast, there is little room for much else. Nevertheless, the relationship between strait-laced Mr. Superville and the incorrigibly flighty Ms. Darcy makes for some touching moments, as well as some surprisingly frenetic dancing. Meanwhile, Ms. Little’s foul-mouthed remembrances of a life spent living dangerously and Mr. Frater’s obsession with his goldfish hint that there are depths to these characters beyond their ability to harmonise. Rachael Jacks’ stage-design also deserves a mention: the set is instantly recognisable as a retirement home, but little details gesture towards a theatrical twist.

Nevertheless, it is the songs which steal the show; the range of genres covered and the inventiveness of the reinterpretations means that there is something for everyone. A word of warning: you may spend the next day humming a lilting version of Smells Like Teen Spirit. If anybody asks you why, just send them to Forever Young, where hijinks and high notes mix with creaking hips and mishaps.