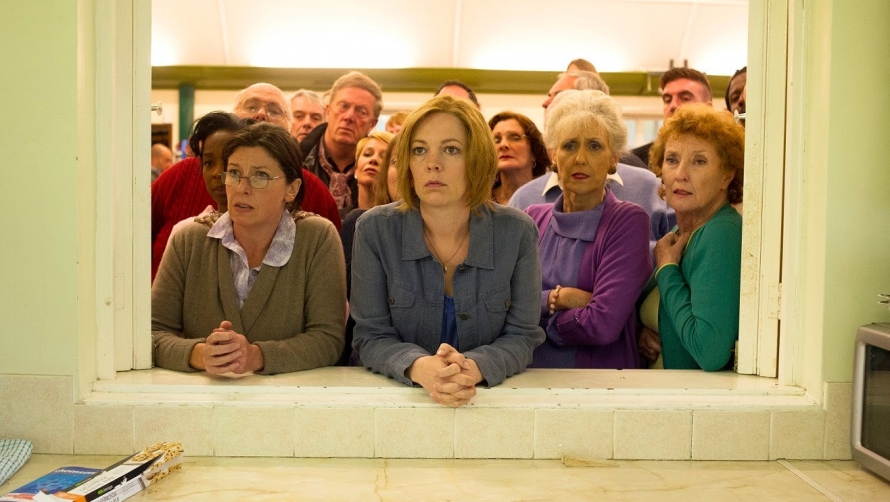 Guest reviewer, Richard Hoare, reflects upon London Road, a powerful film about a community that finds itself at the epicentre of tragedy.

Originating on stage at the National Theatre for not one, but two sold out runs, London Road is difficult to categorise. Although it has musical elements, it is not strictly a musical in the traditional sense but makes a leap to the big screen easily, with some star names to boot.

The film centres on the events which occurred in Ipswich a few years ago, where several prostitutes were murdered. As the events unfolded, playwright Alecky Blythe visited the area and conducted interviews with the residents. She then took these interviews and had them set to music. They were recreated by the performers exactly as recorded, keeping the tone and rhythm of the speech. This is known as the verbatim technique. The cast were made to listen to the interviews on mp3 players over and over again to perfect their “lines” and the cast also played multiple characters in the original production. This means that additional actors are required in the film version and the entire original cast are joined by star names Olivia Colman, Tom Hardy and Anita Dobson. Colman takes one of the central roles of Julie, one of the lynchpins of the local community. This role was originally played by Kate Fleetwood on stage, and she was astonishingly good. In a dual role, she also played one of the prostitutes who were interviewed following the murders, the role she reprises in the film. The two characters couldn’t be more different, and this shows just how incredible Fleetwood’s performance in the original production was.

The verbatim delivery can take some concentration to get used to by the audience, but once the initial shock leaves you, you can marvel at just how brilliant it is. It perfectly captures the feelings of uncertainty felt by the residents, and their renewed sense of community. Because of all the scrutiny on them, they decide to start up a London Road in Bloom campaign to fill the gardens in the street with flowers.

It is important to note that the victims, the killer and the actual murders themselves are not depicted in the film. It is about the reactions of the local residents of a small community to the dramatic events, the press attention and the anticipation of the murderer’s trial. It is by no means a sensationalist piece, and the subject matter is more consequential than central. There were originally accusations that the play and film have come way too soon after the events themselves. One would guess that the people who made these accusations have not seen the piece. Its content is innovative, captivating and probably unlike anything you have seen before. Whereas most films play a hastily recorded theme song over their credits, this film plays samples of the interviews used to construct the songs, and it’s fascinating to hear just how close the film dialogue is to the originals. This might not be an obvious choice for an evening’s entertainment, but it is definitely one which will pay off.