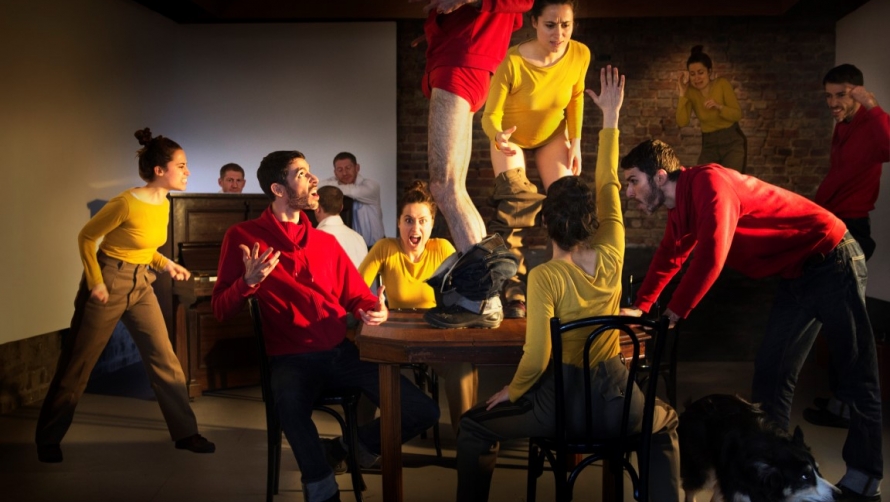 Last night’s performance of Choreography of an Argument Round a Table by Dog Kennel Hill Project ran for an hour without an interval and demonstrated disrupted scenes of disorder, conflict and intensive debate. Five performers were gathered around a table, arguing diverse topics involving political stance, hierarchical polarisation and ownership, namely ‘who should listen to whom’, ‘who possesses some stuff’, ‘is it ok to ask about something’. The topics were fragmented yet organised as a whole.

Structurally, the performance incorporated three periods of arguments with two phases of piano performance and several ‘empty time’ silences. By ‘empty time’, the performers tended to clear the space of imagination for audiences to fully digest and savour the previous occurrences. The show allowed me to gain insights into the use of arguments and questions such as – ‘What do we frequently argue about? Why do we raise those arguments? How do we win or lose those debates eventually? – allowed me to realise that arguments are normal in daily life. However, none of us ever discover the implicit and trivial implications behind those arguments.

One thing that really struck me were the underlying metaphors, or say, hints, in the show that came up at the end as a slight aftertaste. They unravelled the essence of debates – transparently – by utilising physical hints. The performers undressed themselves repeatedly, being naked without reservation. My understanding of this is that we are born with nothing, thereby whatever we scramble for, is something that does not belong to any side of the table in the first place.

An Asian proverb says ‘there are a thousand Hamlets in a thousand people’s eyes’, which made me realise that what we can get from this performance is based on our personal experience instead of universal values. Additionally, coming from a traditional Chinese background, being that close to the performers was a novel experience for me. We sat in a row, facing the performers. It kind of improved the intimacy between audience and performers and amplified the astonishing effects that were placed on the audiences.

Overall, the twisted and distorted dances displayed in this choreography were kind of weird but incisive. The intensive and sharp debates that emerged periodically were edgy and penetrating. The rhythmic chant spreading through the whole Helen Martin Studio aroused resonance among the audiences. It was not a disposal and one-off experience but definitely could lay profound influences on us.

I would happily recommend this show, particularly to those who are studying/ teaching arts-related or philosophy-related subjects.