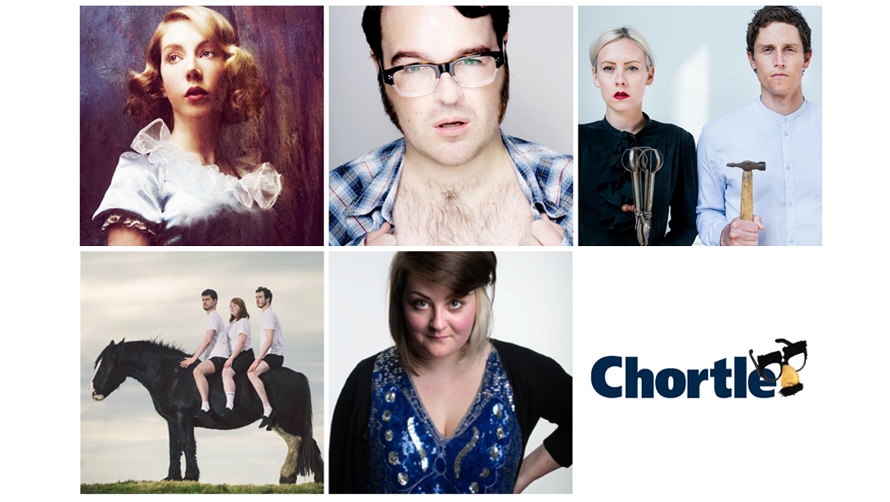 The Chortle Comedy Awards nominations have just been announced and some of them are visiting us to show off their funny bones!

The Chortle Comedy Awards are the only UK-based awards that solely honour the live work of stand-up comedians at a professional level.

The utterly wonderful Katherine Ryan proves that she’s got the talent to match her awesome swag by her latest show, Kathbum, being nominated for Best Tour.
She returns on Thu 3 Mar, this time taking on the Butterworth Hall.

The fabulously boisterous Jarred Christmas never fails to win over an audience yet also keeps them on their toes so it’s no surprise that he’s been nominated for Best Compere! And that’s a good thing for all of us because he’ll be compering The All-Star Stand-Up Tour on Wed 4 May.
The show will also include Gary Delaney, Pete Firman and Sean Hughes.

Bryony Kimmings: Fake It ‘til You Make It

Outrageous, hilarious and fearless performance artist Bryony Kimmings and her partner Tim Grayburn’s show, Fake It ‘til You Make It, has been nominated for the Innovation Award. Fake It ‘til You Make It is a new piece of work about clinical depression and men. Six months into their relationship, Bryony found out that Tim suffers from severe clinical depression.
They’ll be making you laugh and cry from Thu 17 – Sat 19 Mar.

And finally, a woman who practically has a finger in all the pies is Kiri Pritchard-McLean. This hilarious ball-buster has been making something of a name for herself in the short time she’s being performing stand up comedy and has achieved further success as one fourth of multi-award winning sketch group Gein’s Family Giftshop (writer/director).

Gein’s Family Giftshop were invited to appear in the second series of Inside No. 9 (also nominated for Best TV Show in the Chortle Comedy Awards), after Reece Shearsmith and Steve Pemberton saw their debut show in Edinburgh. Their writing talent also led to them writing and starring in one of the 12 Comedy Shorts made for Sky Arts, which are collectively up for the TV Award in the Chortle Comedy Awards.

Fast paced and irreverent, Gein’s Family Giftshop have an enviable gag rate and a stage presence that more established groups can only dream of. Their unique brand of gag heavy writing and gleeful live performances have given the group a core of loyal followers.
They will be visiting our studio on Wed 16 Mar and as an extra special treat Kiri Pritchard-McLean will be supporting!

See the full list of Chortle Awards 2016 nominees here
Voting will be open until 5pm on Sun 21 Feb and the awards themselves will be presented at a ceremony in London on Tue 22 Mar.