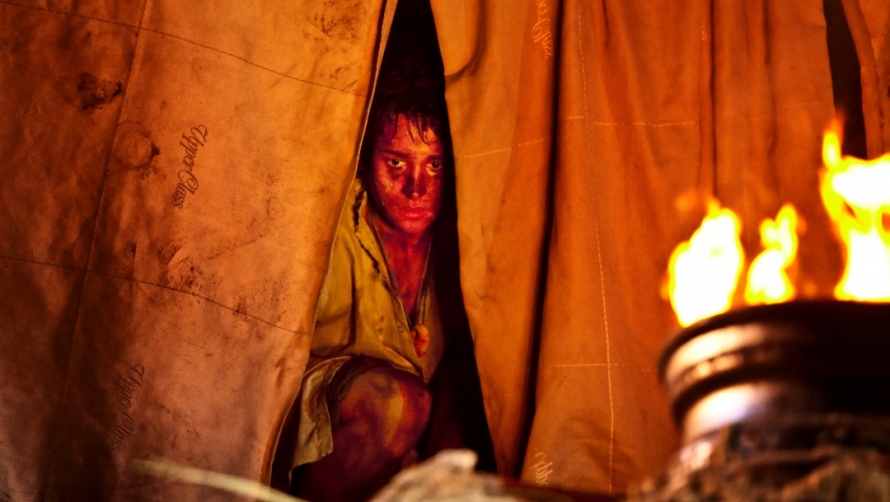 As the audience filed into the Butterworth Hall for the opening night of Regent Park Theatre’s touring production of Lord of the Flies, their amazement at the scale of the set was clear. I could almost believe that a passenger plane really had crashed into the side of the hall, with debris strewn across the stage, smoke billowing from the wreckage, and passengers’ suitcases lying in a tangled heap in the foreground.

A stunned silence fell as crashing drums and chaotic noise signalled the start of the action. The class divide between Piggy and Ralph was established quickly. Lee Rae as Piggy evoked immediate sympathy and amusement through his self-conscious demeanour and pragmatic advice (from his Auntie), all delivered with a broad northern accent. This formed a stark contrast to Ralph, with his clipped accent and the self-assured manner. The entrance of the rest of the boys saw some great comic touches and cultural references that fixed the production firmly in the present day of selfies and media consumption. And finally, the tiny figure of young Perceval completed the young cast, as he stepped into the story clutching his small suitcase. While diminutive in stature, Benedict Barker as Perceval certainly made his mark on the production, bringing moments of hilarity and poignancy to some of the darkest points in the story.

The use of the different levels of the stage cleverly showed the growing divide between the two groups of boys as order on the island began to unravel. Ralph (Luke Ward-Wilkinson) portrayed with great sensitivity his internal struggle between doing the right thing and wanting acceptance. While Jack (Freddie Watkins) trod a fine line initially between commanding the boys’ respect and attracting ridicule. This was a really interesting opposition that added complexity to the character. Credit should also go to the actors playing Simon (Keenan Munn-Francis) and Roger (Matthew Castle). Simon held the audience captive with his poignant philosophical soliloquy that explored the nature of ‘the beastie’. While Roger brought a dangerous insane energy to the production that pervaded every part of his characterisation, from his speech to his physicality on stage. Outside of the individual performances, it was clear that the cast fed off one another’s energy and their performance as an ensemble was both cohesive and powerful.

Movement was cleverly choreographed and at points almost balletic, with slow motion used to highlight moments of violence and savagery. Sound was also used with great effect to draw the audience further into the story – whether it was the melancholy tones of the school choir lamenting the loss of childhood innocence or the pulsating tribal beat of the hunting chant, which along with deep red lighting and characters adorned with fluorescent body paint at times left me feeling as though I was a bystander at some macabre rave.

In short, this was a compelling and sensory production that left me feeling emotionally raw. A tale that mixed gang warfare with cut-glass public school accents. For a cast of adults to evoke such strong feelings of pathos, horror, fear and hope would be a great achievement. The young age of the cast only serves to make the impact of this production even more impressive. If you don’t yet have tickets, get them now.