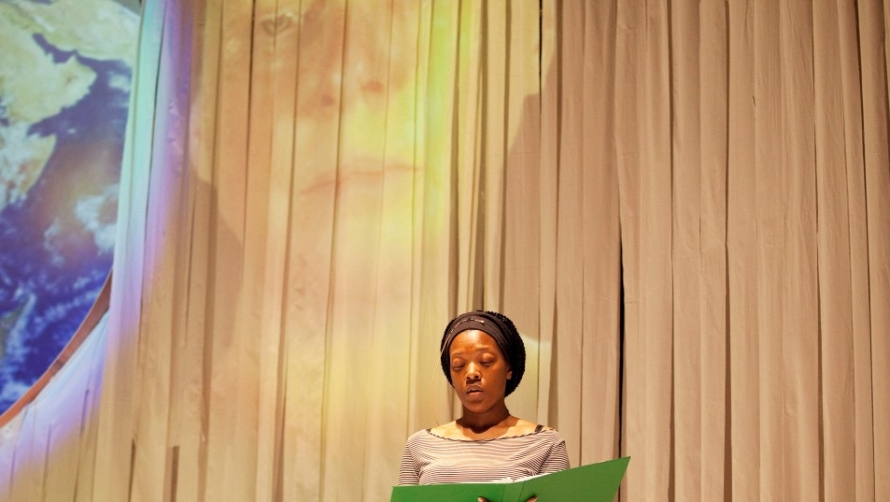 Walking into Fuel’s rehearsal space, the first thing noticeable is the female dominated room, something which Louise Blackwell informs me was a conscious choice. However, she says the fact that I noticed it highlights a problem in the industry: that a female dominated room is unusual enough to be noticed. “It’s not a niche”, says Louise, “This is just the world. We wanted to make a statement that it is possible! We’ve made these choices, so you can too”.

The performance itself has an empowering feminist narrative, promoting a feeling of sisterhood. Many songs convey the idea of viewing women and their role differently, particularly rejecting the “natural” role that society routinely tells women they should fulfil. As well as this, the cast is highly diverse, which, again, is another thing which should not be surprising and yet so often is. Melanie Wilson wrote the opera so that the “group of women from around the world” would actually comprise of one woman from every continent, diversifying an art form, which is so often reserved for mainly white, upper class individuals. The mix of different cultural music styles and the sci-fi genre juxtaposes the traditional concept of the opera, creating something unique and illuminating the concepts of partnership and friendship, concepts that can sometimes be forgotten in contemporary society.

As a reflection of this ideal, Louise assures me that Fuel want to change the traditional idea of the theatre as somewhere where you have to dress up, somewhere that can be inaccessible if you are not rich, if you are young. “We want to showcase the possibilities of re-imagining spaces, for both artists and theatre companies. Artists say important things about the world, from many different perspectives. We try to push boundaries between the art and the audience.” When asked about the inspiration for the staging, Louise tells me that a big inspiration for the team was Beyonce’s stage projections, accentuating their commitment to modernising and diversifying the theatre experience.

Another message important for Melanie and Louise to communicate through the opera is that of environmental stewardship. Opera for the Unknown Woman follows the story of women struggling to survive the wrath of a dying planet, not only highlighting the importance of sisterhood but the importance of togetherness when it comes to environmental change. Louise tells me that the performance is a “manifesto for change, a call-to-arms, inspiring audiences to work together and act on climate change”. She goes on to describe how we are at “a tipping point with climate change”, and how even small actions can go a long way.

The performance itself is inspiring and empowering. Classical opera is expertly weaved together with distorted voiceovers, traditional African call-and-response singing, shouting and, on the other end of the spectrum, synchronised breathing. Louise informs me of Melanie’s focus on voice and sound in the performance and how she wanted to build on solo work, again to maintain the idea of working and acting together, as a community.

Although Fuel did not choose to make the moral messages of the performance their key selling point, it would certainly have provided a grip on an otherwise ambiguous piece. Opera for the Unknown Woman is an inspiring piece, but could motivate a wider range of people if these messages were clear. The motivation of not emphasising moral messages because they should be normalised in society is interesting, as the difference between should and are is currently quite significant. Nonetheless, the unique blend of classical and modern style, diversity and social instruction showcased in the performance is unparalleled. You will walk away speechless, yet inspired to work with your peers to make a change.