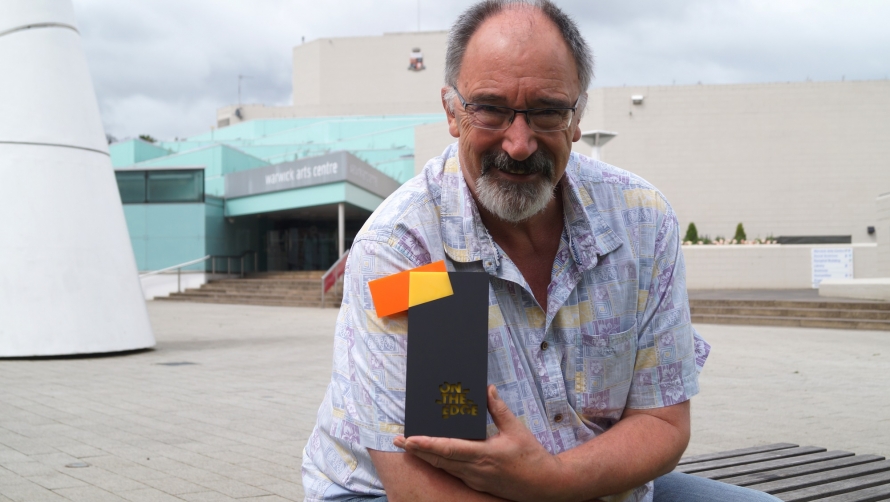 Brian Bishop, Education Director at Warwick Arts Centre, has been honoured with a prestigious lifetime achievement award at an international festival celebrating Theatre for Young Audiences.

Having worked at the Midlands arts hub for more than 20 years, and at the forefront of arts education for more than 34 years, Brian was awarded the accolade by ASSITEJ at ON THE EDGE, the World Festival of Theatre for Young Audiences.

Brian says: ʺA lifetime achievement award is by its very nature a rather daunting accolade. On the one hand it leaves you feeling rather overwhelmed and on the other rather like your life’s work has been completed! Far from it – I love my work; getting youngsters involved, enthusiastic and fuelled with a passion for the arts has always been my main focus. To be recognised for this work and to be honoured with this award is truly humbling, and it’s an award I will treasure.”

Highlighting his commitment and dedication to theatre, education and young people, Steve Ball, Executive Producer for ON THE EDGE World Festival of Theatre for Young Audiences, said: “We were delighted to present Brian Bishop with a Lifetime Achievement Award at our closing ceremony in recognition of the huge commitment he has demonstrated throughout his career to the arts and young people. It was well deserved and a hugely popular choice.” Brian was presented the award by Jo Belloli, Associate Producer of Early Years at Polka Theatre.

With a background in drama teaching and theatre in education, Brian joined the Arts Centre in 1996. As Education Director he heads up an award winning programme of education work for youngsters of all ages and all walks of life. He fundraises for, and runs arts education projects with, schools and communities, often giving children their first interactions with the world of performing arts. For many years, Brian has curated a host of high quality arts programme for children and young people with their families and as individual participants or audience members, he also arranges enrichment activities for youngsters that surround Warwick Arts Centre’s main programme of events and performances.

ASSITEJ is dedicated to the artistic, cultural and educational rights of children and young people across the globe and advocates on behalf of all children regardless of nationality, cultural identity, ethnicity, or religion. The international association is focused on uniting theatres, organisations and individuals throughout the world who make performing arts (including dance, puppetry and visual mediums, live art as well as text based theatre) for children and young people.

ON THE EDGE is the ASSITEJ Artistic Gathering for 2016, which took place in Birmingham on the 2nd – 9th July 2016. Welcoming more than 400 delegates from 45 countries, including Argentina, India and South Africa, ON THE EDGE also honoured other awards on the night, including Young Critics Award, Young Ambassadors Award, Volunteers Award and Next Generation Award.