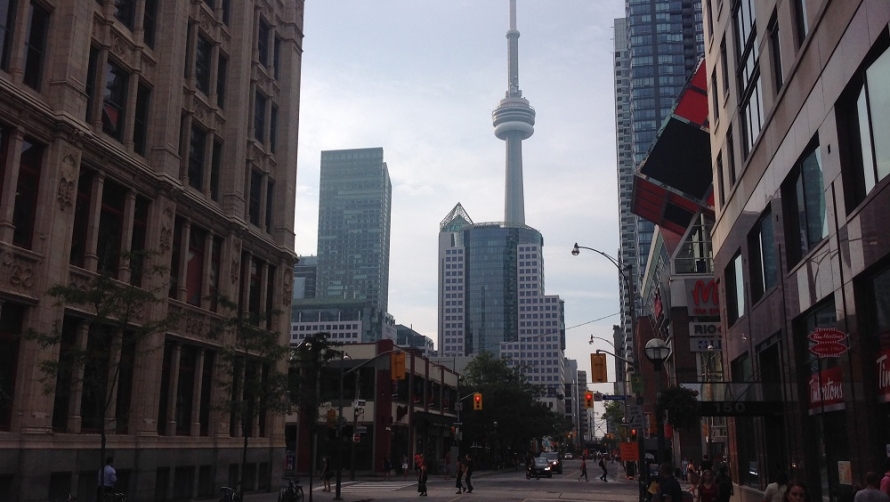 Our resident film-buff, John Gore has travelled across the Atlantic to take in the sights and sounds of the Toronto International Film Festival. So far, it’s been a weather-beaten, action-packed, breath-taking, gritty few days…and that’s before John’s even sat down in a cinema seat.
Here, John talks us through some of the hottest tickets in town and even makes an early tip for Oscar success…

There is a lot of weather on this side of the pond. The flight played tag with hurricane Ziggurat or Imaculata, or whichever, and Downtown Toronto gasped in an airless 34 degrees & intense humidity until it finally rained. This was not apologetic English drizzle, but torrential intercontinental scoop-it-off-the-lake-&-dump-it-on-the-city rain. Suburbia was transformed into a scale model of the Mississippi Delta!

Today is as you were, once more.

TIFF seems to have caught the city unaware, or maybe it has Rio hangover… There’s a disproportionate number of escalators out of commission – or perhaps they are engaged in a campaign to keep festival delegates fit/breathless. Construction work is rife, which sends up clouds of dust and grit, adding an unexpected crunch to meals for diners enjoying rooftop patios and street forecourts. Home from home.

The festival opens tonight with a remake of The Magnificent Seven but by the time it reaches us, on the current exchange rate, it will probably be The Satisfactory Six.

First film of my festival is strong & affecting tragi-comedy, Manchester by the Sea; beautifully scripted & shaded with a host of excellent performances headed by Casey Affleck. Mark this down for Oscar season.

The Salesman is another-majestically controlled exercise in storytelling by Asghar Farhadi. After A Separation and About Elly, the film opens in the midst of what appears to be an earthquake, which shatters the fabric of the city. Husband & wife actors are obliged to move house. Their rehearsals of Death of a Salesman are interrupted by an unsavoury domestic incident which unearths episodes of the building’s past; and the drama that plays out overshadows that on stage. Farahdi confirms his position is one of the finest directors in contemporary world cinema.

The last time I watched a Mira Nair movie in Toronto was Monsoon Wedding on 11/09/01. Coming out of this uplifting drama on a suitably joyous, philanthropic wave, I was greeted by images of the Twin Towers collapsing and the world changed forever… It is 11/09/16 and I have just watched The Queen of Katwe. It’s uplifting and emotional stuff about surmounting formidable adversity to become a chess champion in Uganda. The aftermath, this time, is rather less cataclysmic.

Other highlights today have included a very different British costume drama, Lady Macbeth, and account of murder and manipulation in the North East in the age of Austen; and Oliver Stone’s Snowden, the account of Edward Snowden’s whistleblowing and defection, but also an examination of the activities of America’s national security agencies. Scary stuff, but brave storytelling in the All the President’s Men tradition.

That’s it from John for now, but he’s sure to be filling up his popcorn bucket and taking in a few more films over the coming days, so stay tuned for more.