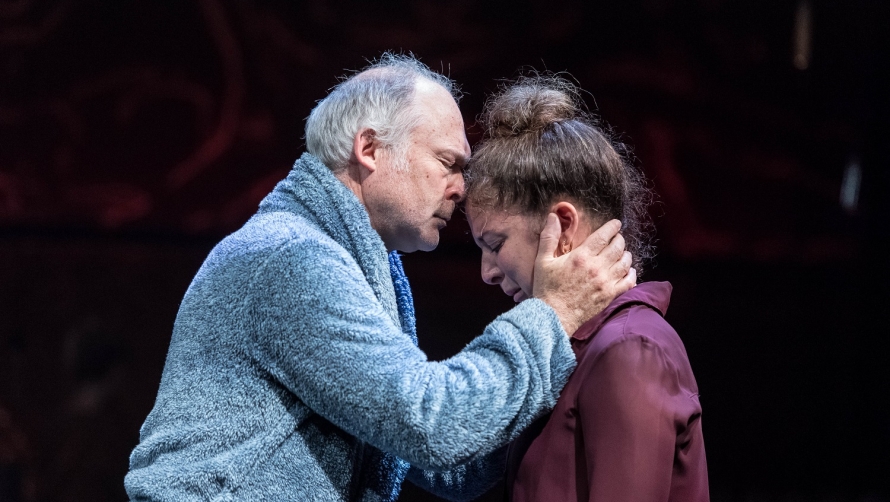 The inimitable Frantic Assembly arrive at Warwick Arts Centre tomorrow (Tue 11 Oct 2016) with their stunning production Things I Know To Be True. We spoke to the fabulous Natalie Casey, whose powerfully emotive performance as Pip will blow you away!

Have you worked with Frantic Assembly before?

No, I’ve not worked with Frantic Assembly before. I was very aware of their work before I started the job, and I was very excited about the audition, but then I did the audition and I couldn’t walk for three days afterwards – it was really physically hard. I don’t know if I fully comprehended how complex it is, and what an amazing company they are. What they do is phenomenal. I’d never worked with them before, and I’m hoping that I don’t mess it up, and that they’ll have me back.

What drew you to the part, and the play?

The complexity of the writing drew me to the play. Initially when you read Andrew Bovell’s writing, you think: “that’s lovely, that’s a really marvellous speech, that’s interesting, it’s really sad, it’s also really happy”. He’s a poet; an unbelievable writer. Coupled with the physical movement, the two marry together so well. It’s about a family, and the physical aspect means that, in a rehearsal room, you are so close to the people you are working with; you’re right up against them, you’re holding them, you’re lifting them, so it really does create the atmosphere and the illusion of a family live on stage. That’s a very rare thing. I think a lot of family dramas are people standing in a set that looks like a kitchen, shouting at each other, and this is an entirely different thing altogether – a very, very complex piece of work.

Could you tell us a little bit about your character in the play?

I play a character called Pip Price, and she is the second-oldest child in a family of four. And I take the decision to entirely change my life. I am married with children, and I feel that my marriage isn’t going very well. So I decide to change my life and leave my husband and children for a new job and more exciting personal opportunities.
Did you happen to see the production in Australia before you started rehearsal?
NC: No, and I’ve never been to Australia – after working with the State Theatre Company of South Australia, I feel that I should at some-point go over to Australia – it’s a very long way away though isn’t it. So no, I didn’t see this piece, but I’m glad that I didn’t. I think when you take on the mantle of something that’s been done before, even though it’s only been done once before, it’s a very important thing to have your own take on it. I think that sometimes if you watch things, it can influence the way that you’re going to play it, and that should never be the case. You should listen to the Director; the Director should influence how you play it – not you seeing a piece before.

So Frantic Assembly are well-known for their celebrated physicality; how are you enjoying that part of the production?

It’s amazing. It’s the most physical thing I have ever had to do in my life, and that is incredibly daunting, but what’s brilliant about Frantic Assembly, is through their rehearsal process, and their training, (we do circuit training and we do cardio, and we do weight-training every single day), before you know it, you are able to do stuff that you never thought you would possibly ever be able to do. They do it with such a massive sense of humour around it. My fear about physical theatre is always that it’s going to be people standing around in a circle, someone very dimly-lit in a tabard shouts “number 8, number 8” while people run around the stage, and I’m always thinking, I can’t possibly come and see that. But I think what’s amazing about Frantic Assembly is that before you know it you’re doing the most unbelievable stuff; finding it, not-easy, but comfortable, and to marry that with the drama of the play is no mean feat.

You’ve worked both on-stage and on TV; which do you prefer? If either of them.

I think they both have their merits. TV is amazing because you can interpret a part and a story that will be seen by a lot of people, and you can affect a lot of people. You can develop your skills, because in TV you get to repeat and repeat things. But I think that theatre is the true meaning of acting, because if you do a play, and you’re saying your lines, and you’re on-stage, and you’re rubbish, you will know about it, because no one will clap. So that’s the brilliant thing about theatre; it develops you properly as an actor, it’s live. It’s really the only live medium of acting. People see film and TV as being live, but it’s not. It’s entirely fake. Whereas theatre is entirely real, (even though it’s fake).

What was your first theatre job?

It was probably, from what I can remember, a show called She’s In Your Hands at the Royal Exchange in Manchester, and that was when I was 9, I think. In Warwick, they have a lot of theatre and drama students who use the Arts Centre on-campus, so what do you wish someone had told you when you were starting out? NC: There are basically only two rules of acting: that’s not fair and don’t be late. That’s it – those are the only rules. Anything else you’re pissing in the wind. And also, be yourself, don’t be nasty– that’s another important one. And that’s it. What do I know? I don’t know anything. I’m always amazed that anyone’s employed me, to be frank. First day of the read-through, I’m thinking; should I sit down, or should I just go, straight away. All I can say is don’t be nasty, do your work, and have a good time.

Do you have any pre-stage superstitions or break-a-leg rituals?

Not really. When it’s the press night, people get very, very nervous, and I’m very susceptible to picking up other people’s emotions. I like to just spend a little bit of time just on my own; I like to go and stand at the side for a little bit, on my own, get my shit together, go on and do it. I like listening to music very, very loud in the dressing room. I’m a big gangsta rap fan, (I’m not making that up, it is true). So I listen to Retang very loud before I go on stage. It really gets you in the mood.

And then final question – you’re obviously really well-known for your comedy both on-stage and off-stage,…

Thank you, I appreciate it.

…with Things I Know To Be True, is it a different direction for you?

I think it is. The last couple of years, I’ve sort of dipped in and out of comedy and straight theatre, (although I hate that expression because everything’s the same – life is comedy and drama all at the same time), but this is very, very challenging. The last time I did something like this was quite a few years ago, but I think the two things marry, and the brilliant thing about this play is that it is brilliantly hilarious and terribly tragic, because that’s life – Man falls off bike, hilarious; man dies, terrible.
blog comments powered by Disqus