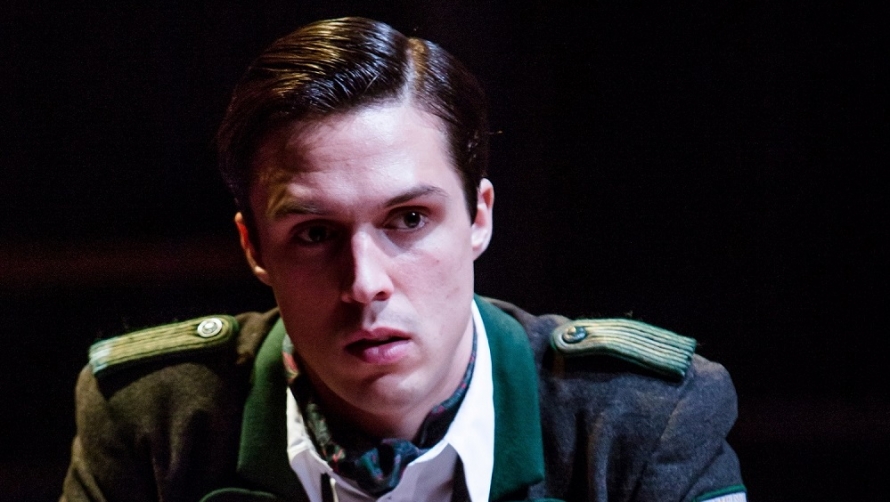 The first night of the English Touring Theatre’s French Without Tears went down a storm at Warwick Arts Centre, on Tue 1 Nov. With five shows left on our Theatre stage, we spoke to actor Ziggy Heath who plays the part of Alan , a young man feeling pressured over what he should do and what he wants to do.

What can you tell us about French Without Tears?

It tackles the universal problem of falling in love with the wrong person. It’s also a coming of age play about kids who learn a hell of a lot about themselves, and work out what’s important and what’s not important.
We performed this show at the Orange Tree Theatre in London a few months ago and it’s been so lovely getting back into it for the tour. We’ve fallen in love with it all over again.

How does your character, Alan, fit into the story?

He is an absolutely nightmare. He’s intelligent, frustrated and feeling the pressure of having to fulfill other people’s expectations. His family’s in particular. During the course of the play he discovers which path he has to take in his life to achieve happiness.

Do you see much of yourself in Alan?

Yes and no. In this play, Rattigan mirrors a lot of his own life story in Alan. They were both the sons of diplomats and they were both caught between doing what they wanted to do and doing what they were expected to do.
I definitely had a stage very recently of being in a position where I couldn’t do what I wanted – and not quite knowing what that thing was anyway! But I’ve been out of the woods with that for a little while now so I suppose I’m more like the Alan at the end of the play than the Alan at the start.

What’s the cast dynamic like, with so many young actors all working together?

It’s brilliant. It’s like a big family. It’s really nice to be doing a story with a bunch of young actors who are all at similar points in their careers. But it’s helped massively by the experience of some slightly older actors who can tell us when we’re being idiots.

I understand you’re in several big upcoming film and television projects including Denial, Black Mirror and Harlots. What can you tell us about them?

Unfortunately I can’t say anything about Black Mirror, other than it’s going to be on Netflix instead of Channel 4. All very hush hush!
Denial is very exciting. It’s a film about Holocaust denial and a legal case to try and prove the denier wrong. It was my first job out of drama school and it’s just coming to cinemas at the moment. I play the assistant to the lead lawyer, who’s played by Andrew Scott. He’s just incredible and so humble as well. It was a really special introduction to the film industry.
More recently, I was filming a show for ITV called Harlots. It’s a show about these two boarding houses who are competing to be the best in Georgian Covent Garden. I play a young journalist who gets involved in the politics between the two houses, by helping them both spread rumours about the other. It’s a really exciting female driven piece – it’s got a female writer, a female director and a cast that is predominantly female. It’s the world of Georgian prostitution told from the prostitutes’ point of view. It’s got a great script. Even though the characters are mostly prostitutes, they’re not defined by their gender. It’s about their relationships with each other and how they keep each other alive in a world that’s pre-police.

For me there’s nothing like a live audience. It makes every single show unique because no audience ever reacts the same way. The tone of each performance changes because we respond to the audience. It’s a much more visceral, active kind of acting. It feels much more shared.
It’s also fulfilling to follow a story from start to finish. With film and TV it’s much more fragmented. But the magic of film is that it has so many stages of creative process and so many different people’s influences on the same piece of work.

I’ve heard that you won the LAMDA prize for stage combat. How did you manage that?

Oh yeah! I won a thing called fight night. It was a competition to see which pair of fighters could create the most technically impressive fight scene. My partner Ryan and I were coached by the principle of LAMDA, who fenced for Great Britain back in the day. We used two blades each. One was a shorter Jacobean dagger and the other was a proper sword. We did a scene from a Jacobean play in the Greenwood theatre in London Bridge. It was a great night. Really exciting. Just before you go on stage it goes out of your head that the fight is pretend and your body genuinely thinks that you’re about to risk your life.
Have you had the chance to put your skills to use yet?
Not yet – hoping to have the chance one day!

One last question! Ziggy is a very unusual name – is there a story behind it?

I come from quite an old fashioned Catholic Polish family so when I was born my mum was under a bit of pressure to give me a traditional Polish name. But she also loved David Bowie. So she had the idea to call me Zygmunt to appease the family but from day 1 I was really called Ziggy.