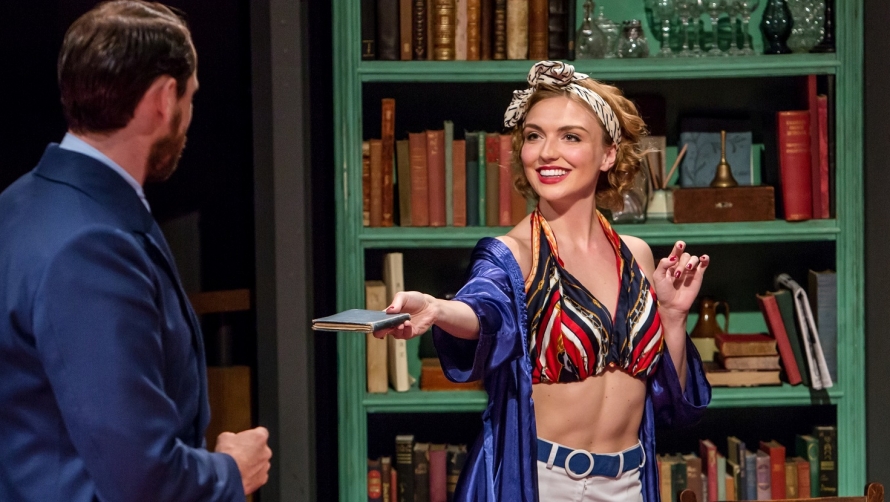 On Tue 1 Nov, the Terence Rattigan play, French Without Tears heads to Warwick Arts Centre for a wonderful 5 day run. We caught up with actress, Florence Roberts, who plays Diana, to find out a little bit more about the play, her role and the advice she would give to aspiring actors.

What can you tell us about French Without Tears?

It’s a wonderful comedy set in France in the 30s. There’s a group of English boys who are all desperately learning French when a girl wanders into their midst and disrupts their concentration.
It’s a period with a very specific style. That presents a really interesting challenge because you want to capture that way of dressing and speaking without making it a caricature. We’ve all had that aim in mind as we’ve tried to recreate that era. Audiences seem to be very receptive which is great. It’s such a lovely feeling making people laugh every night.

How does your character fit in to the story?

I’m playing this femme-fatale called Diana. She’s really good fun as she’s always up to no good. She chases all the men, plays them against each other and enjoys watching them get in a real tangle over her. There’s a lot of humour and joy in the role.

Diana terrifies the young men in the play. Does anything make her nervous herself?

Yes, certainly. That’s why she’s such a brilliant character. Our director described it perfectly. He said that she’s like a swan – gliding along elegantly on the surface but underneath she’s paddling furiously. I think essentially she’s a lonely person. She doesn’t have a great relationship with her parents who live a long way away. She’s living in this house with all these men who don’t say particularly nice things about her. And she’s fighting to survive in a man’s world. What’s so great about her is that she knows exactly what’s what. She’s aware of the constraints on women’s freedoms and what’s expected of her but she tries to subvert all that. And she’s very good at making the men look silly.
I think she’s incredibly intelligent but she doesn’t know it because she’s never been told it. She’s been told her looks will take her places so she takes advantage of that. What she’s terrified of losing is the attention. She feels that if she doesn’t have at least one man running after her then she’s nowhere. In that period of time, many women saw their purpose as finding a rich husband. It wasn’t just something they fancied doing. It was something they had to do. If you understand that then you understand why Diana does so much of what she does. She does it to survive. There’s a line in the play “I always act on the principle that there’s safety in numbers”. That says a lot.

Do you see much of yourself in Diana?

I suppose I’d like to think I have some of her spark – her gutsiness. I wouldn’t go as far as Diana but that’s largely because I don’t need to. I can see where she’s coming from. My sympathy for her keeps on growing the more I come to understand her. The reactions we’ve had at some of our audience Q&As have been really interesting. Some people feel sorry for her and others just think she’s a cow. She’s certainly divisive. Some audiences even vocalize those feelings at me! I’ve been called a b**** a few times now which, strangely enough, I quite like. It’s great to provoke that kind of reaction!

What’s the cast dynamic like, with so many young actors all working together?

It’s lovely. We all get on so well. There are no little cliques; we’re just one big group. It’s lovely hanging out with everyone. Hopefully we’re going to be able to get to the beach together at a few points on the tour! Also, the older guys have totally just mucked in with everyone else too.

Back in March you were in an acclaimed production called BU21, which was about a terrorist attack on a plane and the ensuing repercussions. What was that experience like?

There were 6 of us and we each had our own story. My character sees an airplane seat fall into her back garden. She becomes completely obsessed with the story of this guy who died in it. She feels like she sees him everywhere. Later in the play all the characters come together in this PTSD group and talk about their experiences. She suddenly sees the man at this PDST meeting and it turns out to be his son who’s come to share his grief. From there they form this strange relationship. It was a very intense experience because of the subject matter, but it was an amazing experience. The response was fantastic and surprised all of us as we didn’t know quite which way it was going to go! The writer has this fantastic ability to write about the most horrific things and make the audience laugh.

Now that you’re two years out of Drama School, do you have any advice for any aspiring actors and actresses on their first steps into the industry?

Just stay calm and don’t worry about what anybody else is doing. You’ve got a long career ahead of you and you do not need to panic in the first few years. Those first few years put things in perspective. You have to remember that you’re on your own path!