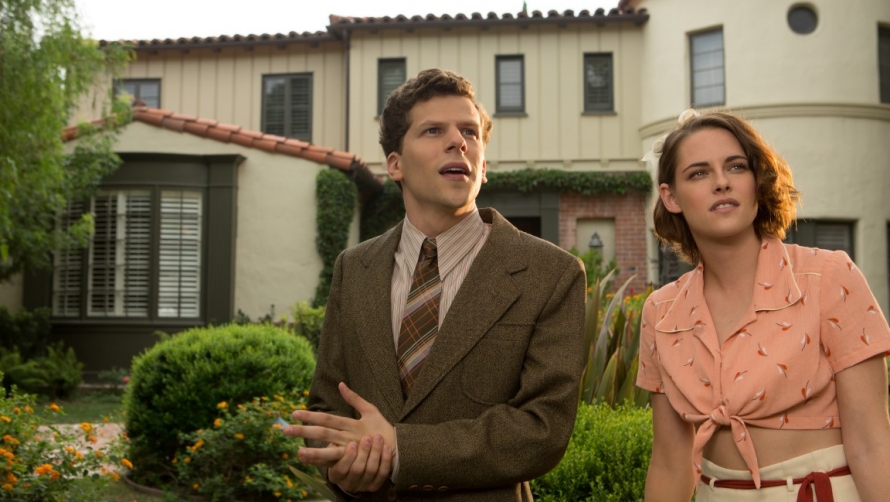 Great film for Woody Allen fans and non-fans alike! All the tenets of classic Woody for the Allen Aficionados and for everyone else – a spell binding story of two people falling in love at the wrong time, with fabulous visuals and superb performances from Jesse Eisenberg, Kristen Stewart & Steve Carrell.

Set in the 1930s, Café Society follows New York born Bobby (Eisenberg), tired of life in the Bronx, to the bright lights of Hollywood (where his Uncle (Carrell) lives and where he meets and falls in love with Vonnie (Stewart) and back to New York again.

Bobby’s uncle, Phil, is big in the film industry in Hollywood and Bobby is simply looking for a new life/ job. Vonnie is Uncle Phil’s secretary and part of her job is to make Bobby feel at home. After a few months, Bobby realizes that although he is not happy on the West Coast, he has fallen in love with Vonnie. He proposes to Vonnie and asks her to move to New York with him. However, unbeknownst to Bobby, she has a “secret” lover, who also proposes. Bobby disillusioned, moves back to New York alone and works in his gangster brother’s night club and from a seemingly simple plot another Woody Allen great emerges.

The man himself doesn’t have a physical part this time but his voice-over narration gives him a permanent presence and serves as an outlet for his trademark one-liners and dry observations on the meaning of life or lack there-of (’…live your life like every day’s the last, and one day you’ll be right’). The film bears all the hallmarks of Allen’s work but is much more: a proper nod to the movie stars, socialites, playboys, debutantes, politicians, and gangsters who epitomized the excitement and glamour a bygone age, all absolutely beautifully portrayed.

Stunning costumes, gorgeous scenery, wonderful music, and a fun story: what more could you want!

I enjoyed every minute of it and will almost certainly watch it again!