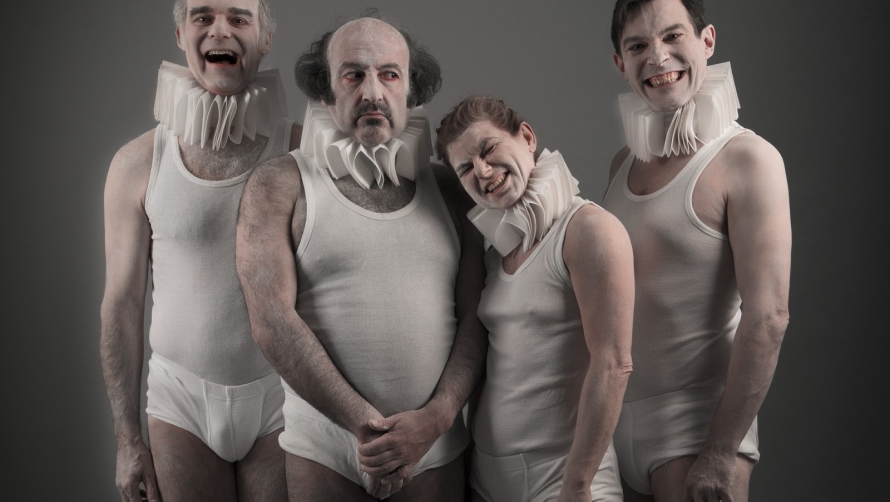 The stage is draped in clear plastic whilst a woman lies motionlessly on the floor. A man with a handycam walks around the stage with a fly on a stick. This is the least bizarre moment of tonight’s production of The Complete Deaths by Spymonkey. At the side of the stage is a woman dressed in black knitting underneath a giant scythe. The Grim Reaper sits behind her death clock which will countdown every time the claxon sounds another onstage casualty.

The Complete Deaths is a tour-de-force, portraying all 75 onstage deaths in the works of William Shakespeare. Murders, suicides, stabbings, beheadings and poisonings are all executed with devastatingly funny effect. Despite simple staging and makeshift props, The Complete Deaths is sleek, quick witted and never misses a beat. The Complete Deaths feels effortless and is a tribute to the well-oiled troupe that is Spymonkey.

Beyond plastic swords and toy guns, the deaths are incredibly innovative. A metal stock cage is turned into a mincer with all four performers happily diving in to be turned into meat pie. The most creative has to be that of Cinna the Poet. Atop a table, a miniature stage is set with paper dolls; the players of the scene. A handycam captures the intricacies of the scene and is projected onto the screen at the back of the stage. Cinna the paper poet is coated in lighter fluid and set alight. Fire is traded in for a giant bubble with Petra inside quoting Ophelia as she finally takes a stand to include her drowning in the show, despite being exempt as her death occurs offstage. Toby and Stephan represent the extremes in the material. Whilst Toby speaks with gravity about death, Stephan gurns and smiles. He reminds us all not to take life, or death for that matter, so seriously.

Completing the ensemble and stealing the show is Aitor; the Spanish Clown. Aitor longs to be taken seriously as a Shakespearean actor. He is visited by the Bard himself via a projected talking head. He teaches Aitor the Kenneth Branagh approach to Shakespeare; stand with legs apart, spit and point at everything. This wisdom is put to use as he acts out the death of King Lear. This scene ends in tears and they are all from the audience crying with laughter.

As Petra crosses her fingers at the beginning of the show for a west-end run, I found myself wishing the same as the 75th onstage death closed the show. The final death of the night is that of a fly in Titus Andronicus. This show is absurd and absurdly clever. The half full auditorium did not reflect the success of the show but the howls of laughter and rapturous applause made up for missing numbers. Spymonkey will be on the top of my must watch list from now on. I urge you all to look into the face of death and laugh, and catch The Complete Deaths on tour. Honestly, who knew death could be so funny?