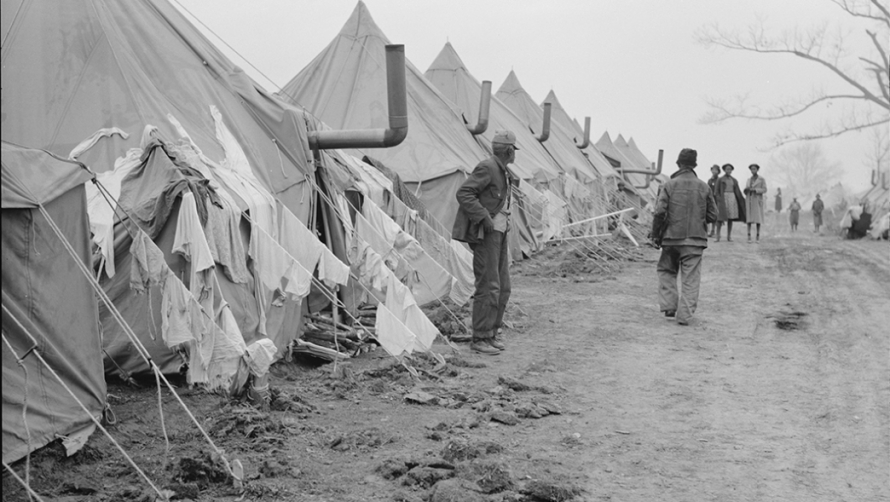 Our new exhibition, The Human Document – Photography of Persuasion from 1930s America to Present Day opens tonight and in its celebration – along with the fact it’s National Poetry Day, we are sharing a wonderful poem by the American Folk musician, Woody Guthrie.
The image above was taken by Edwin Locke
A street of tents in the camp for flood refugees at Forrest City, Arkansas
February 1937
Image courtesy of Library of Congress Prints and Photographs Division, Washington

On the 14th day of April of 1935,
There struck the worst of dust storms that ever filled the sky.
You could see that dust storm comin’, the cloud looked deathlike black,
And through our mighty nation, it left a dreadful track.

The radio reported, we listened with alarm,
The wild and windy actions of this great mysterious storm;
From Albuquerque and Clovis, and all New Mexico,
They said it was the blackest that ever they had saw.

From old Dodge City, Kansas, the dust had rung their knell,
And a few more comrades sleeping on top of old Boot Hill.
From Denver, Colorado, they said it blew so strong,
They thought that they could hold out, but they didn’t know how long.

Our relatives were huddled into their oil boom shacks,
And the children they was cryin’ as it whistled through the cracks.
And the family it was crowded into their little room,
They thought the world had ended, and they thought it was their doom.

The storm took place at sundown, it lasted through the night,
When we looked out next morning, we saw a terrible sight.
We saw outside our window where wheat fields they had grown
Was now a rippling ocean of dust the wind had blown.