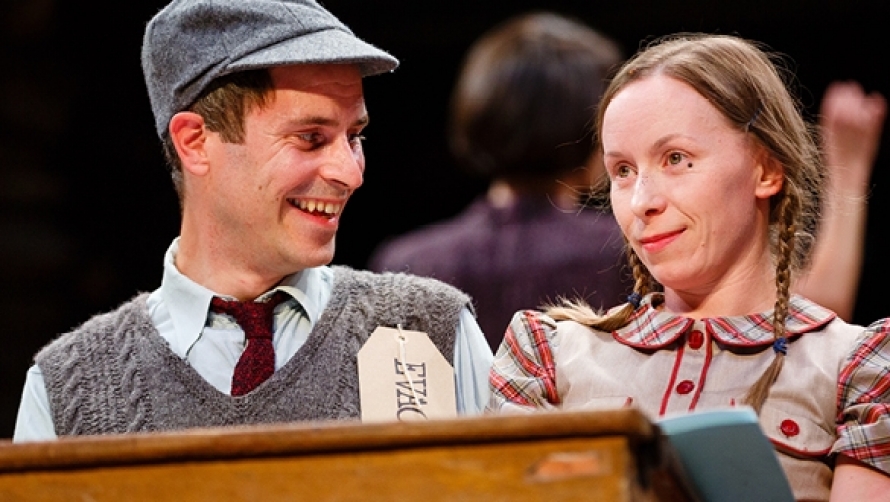 Actor Adam Sopp has performed numerous roles on stage and screen – he’s even provided the voice for a certain well-known wizard in a series of video games. Right now, though, he’s here at Warwick Arts Centre playing the role of Barry in Kneehigh’s spectacular show 946: The Amazing Story of Adolphus Tips. We caught up with Adam to find out what it’s like performing in a show like this, which includes plenty of singing, dancing and puppets. Have a read of the interview below.

946: The Amazing Story of Adolphus Tips is an exuberant production with a serious side. The show must have particularly strong resonance in today’s political and social climate. Have current affairs informed your approach?

When I first started rehearsing the play I kept saying refugee instead of evacuee. Thinking about what Barry would’ve gone through in London during the blitz before arriving at Slapton Sands and his immediate transition into a completely different way of life I kept finding myself looking to the parallels with the children facing perilous journeys today in the pursuit of safety. That sense of outsiderness and displacement. A sense of safety that was promised to you and how the reality matches up to that. That being said, I would much rather be a child evacuee in WWII than a child refugee today.

I was a complete newbie to puppetry before this job. Luckily I only have to wave a bird on a stick for a minute! The amazing puppet maker Sarah Wright gave us all a workshop on how to work them though which was invaluable. I love how quickly audiences stop looking at the human handler and believe the life of the puppet.

How do you get the balance right between humour and fun and the more serious themes in the performance?

The juxtaposition of humour and tragedy is what makes this play work so well. It’s up to us as storytellers to play to play the truth of each moment whether it be serious or slapstick.

Without giving too much away…the story is features little-known historic events – had you heard the tale before?

I’d not heard of the events before working on the show which is why I feel our story is even more important. If these historical events aren’t told to a new generation then they can’t be learned from.

946 is a really high-energy show. How do you maintain your energy levels whilst on tour? Is there a lot of physical preparation involved?

A banana every interval and several bottles of water backstage! We spend a lot of time before the show doing focus exercises and playing games to get us working as a team.

Some of the cast have multiple roles to juggle – what is it like preparing for more than one role?

I’m quite lucky as I only play two roles and I don’t switch all that much but it’s amusing to see your cast mates come on stage in the wrong costume. Trying not to laugh can be hard!