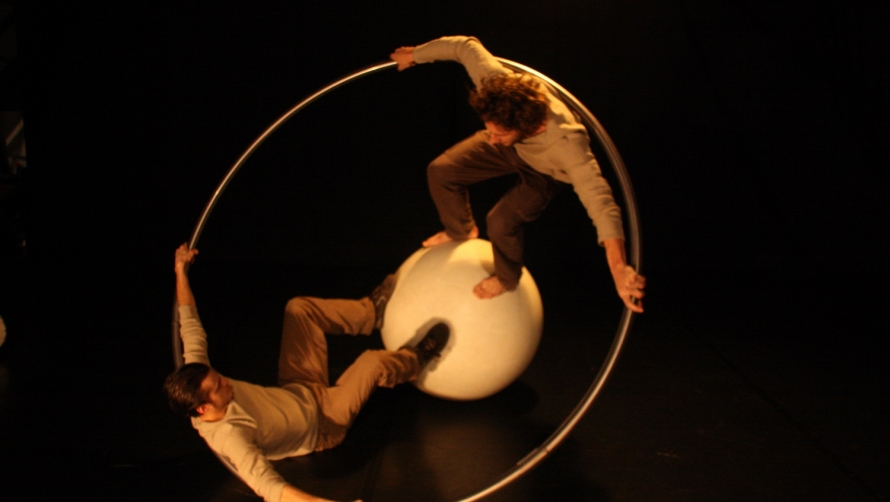 Ahead of the performance on Tue 15 & Wed 16 Nov, one of our student ambassadors, Louise Balcombe, headed to Oxford Playhouse to watch Gasp! by Circoncentrique.

Sometimes a stage needs to be filled with a busy set, intricate costumes and a complex narrative to fully engage an audience. Other times, simplicity wins. In the case of ‘Gasp!’ – two men, some plastic balls and a giant hoop successfully captivate the packed out theatre from start to finish, demonstrating circus skills like you’ve never seen before.

We are first treated to ‘Knot’, a performance from the duo Nikki and JD. They mesmerize the audience with the story of their relationship told through their incredible acrobatics. They speak directly to the audience, with their humour putting us at ease. This allows us to loose ourselves in their performance, which is powerful and beautiful. With music to match the mood of the scenes, such as electronic bass or soft piano, their movements appear seamless as they flow across the stage. The audience isn’t afraid to share their reactions; there are gasps when the duo attempt a particularly difficult pose, such as JD flipping Nikki over his body to land on his head, on which she stands on one foot. At times such as this, we break into applause, in awe of their talent. As well as telling an emotional story of two friends, they captivate us with their unique, contemporary movements.

After the interval, we are excited to see what Company Circoncentrique has in store for us with their show, Gasp! They certainly do not disappoint. The two men form an immediate connection with us, with their impressive and swift movements contrasting with the friendly slapstick comedy. Their close relationship reminds me of two brothers in a play fight but instead of wrestling, they’re flying, flipping and rolling over one another. They introduce the different plastic balls to their acrobatic game; they mimic circus clowns, juggling and jumping on them, but we know they’re so much more than that when they perform their mind blowing stunts. Their acrobatic adventure is told not with words, but through body language and exaggerated facial expressions and the pair working together in what is clearly a carefully choreographed and well-rehearsed piece. I notice one particular moment during Alessandro Maida’s powerful solo when we were transfixed on the fluidity of his movements which are in perfect synchronisation with the sphere, accompanied by a lullaby from the piano.

The live music from pianist Işil Bengi enhances the rhythm of the choreography and dramatizes the emotive moments. I felt that the combination of the acrobatic manipulation of the objects as well as their bodies combined with the comical relationship and engaging narrative created a tantalising piece. The fearless acts of defying gravity captivates the whole audience, young and old. Again we audibly react, laughing and gasping, particularly at moments when both men are in fluid motion with both the hoop and ball spinning round the stage, almost like they’ve become one. Company Circoncentrique’s thrilling performance is thoroughly enjoyable, mesmerising us with acrobatic circus skills in ways we didn’t believe possible.

Gasp by Circoncentrique will be at Warwick Arts Centre on Tue 15 & Wed 16 Nov. To book tickets, please click here.