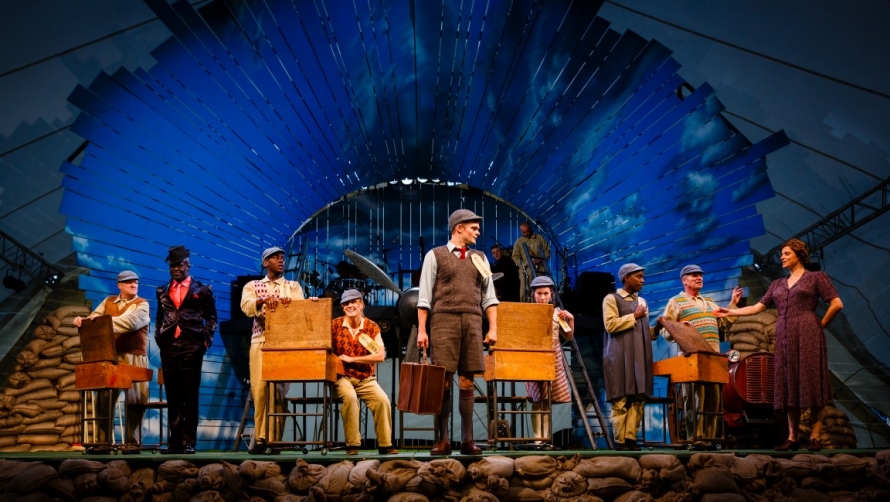 Most of us are probably familiar with what happened on 6th June 1944. However, not many people know about the large scale rehearsals that happened in preparation for the landings. One of these rehearsal landings, in particular, resulted in the deaths of 946 soldiers in Devon. Although 946: The Amazing Story of Adolphus Tips is based on this tragic event, the play is filled with puppets, songs and dances that go far beyond the themes of war and loss. Through its energy, funkiness and humour, the play explores the beauty of human relationships through the meeting of two different cultures, making the story accessible for all ages.

Directed by Emma Rice, former artistic director of The Globe, 946: The Amazing Story of Adolphus Tips certainly reflects the innovation and imagination for which she is well known. Such Rice’s imagination is reflected in many scenes. One involves Churchill and Hitler competing against each other in rock, paper, scissors and rope skipping contests, whilst another contains chicken puppets being manipulated across the stage. As bizarre as these scenes seem, they capture the setting perfectly and leave the audiences in laughter and surprise.

The atmosphere is further heightened by the amazing set, which has at its centre a large WWII plane propeller and a platform for the live band that provides an amazing soundtrack throughout the show. The music, a mixture of jazz and folk tunes, creates a soulful accompaniment to the action on stage mixing well with the uplifting and energetic dance routines. By drawing different cultural musical references together, the play really makes the most of the humorous and intimate encounters between British villagers and American soldiers.

One of the show’s stand-out performances comes from Katy Owen in the role of Lily Tregenza. Lily, the show’s central character, is a spirited young girl who is by turns sweet and peculiar (she loves flashing her knickers…). Not only is Owen able to portray such a complex personality in an believably innocent and ‘teenage’ way, her interaction with the audience is well timed. There is one moment in the performance when she hugs an audience member after he comforts her over her lost cat – a heartwarming moment that highlights the beauty of human relationships.

Although this is fundamentally a feel-good and energetic production, the show does have its flaws. Although the music and singing is engaging and fun, there are times when the constant soundtrack seems to undermine the narrative and can seem at odds with the historical events that happen in the play. Nevertheless, this is only a minor issue as the play does have its emotional moments.

946: The Amazing Story of Adolphus Tips is a play for everyone and it will surely give people a memorable experience. When you see young and old audiences clapping, singing and dancing merrily in a performance, you know that it is doing something right!