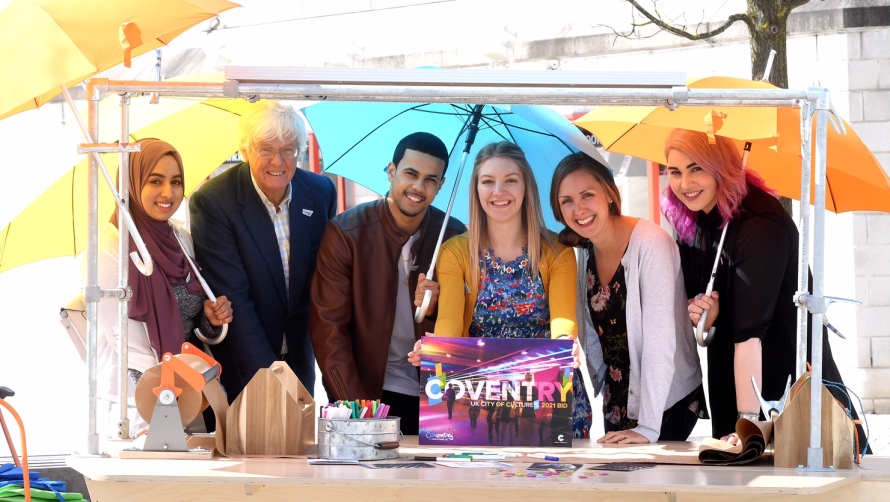 It’s over 30 pages long, contains over 20,000 words and has been in the planning for more than a year and a half – Coventry’s initial bid document to be UK City of Culture in 2021 is complete.

The document outlines why Coventry should follow on from Hull and bring the prestigious title to the city in 2021. It has been produced by the Coventry City of Culture Trust and has been submitted to the Department of Culture, Media and Sport.
Coventry is expected to find out before the summer whether it has made the shortlist for the prize.
To celebrate its completion and submission, the Trust welcomed a whole host of individuals, groups and organisations from across the city to an event at Coventry Cathedral.

As well as setting out a programme of events that would take place right across the city and would include a range of communities in 2021, the bid document also shows how a successful bid would leave a lasting, positive impact on Coventry. Coventry 2021 will reimagine the place of culture in a diverse, modern Britain.
It has been based heavily on research into the social and economic make-up of Coventry along with evidence on the number of visitors the city attracts, from where and for what types of activity.

Laura McMillan, manager of the Coventry City of Culture Trust, said 18 months’ of work has been building to this moment.
She said; “Every community visit, every workshop, every event, every media interview and every meeting has been all about this document and making it the best it can possibly be to reflect what Coventry is and everything it could be if we are successful. There have been some very long hours and some massive decisions along the way but we couldn’t be happier with the bid.
“It recognises the challenges that Coventry faces but also some of the great things that are going on under the surface. The evidence we’ve gathered from the research – such as Coventry being a very young, diverse city – has had a huge bearing on the bid.
“The support we’ve had along the way – from the public, from key local organisations, from businesses and from the media in the region – has been nothing short of incredible.
“Coventry is right behind its bid to be UK City of Culture and I have no doubt that seeing the fantastic start that Hull has had and the economic benefits it is already achieving has helped to show, again, what it could do for Coventry. We are very excited to be submitting this bid and we believe we have done Coventry proud. We wish all the other bidding cities the very best of luck but, of course, we believe that we’ve got the best case to be UK City of Culture in 2021.”

Coventry’s bid themes include ‘moving’, ‘underground’, ‘reinvention’ and ‘being human’ and will help to form the programme that would run throughout 2021 and could include up to 1,000 events during the year.
Coventry City Council, The University of Warwick, and Coventry University are Principal Partners of the bid and are providing significant support. The Ricoh Arena is Bid Sponsor while Jaguar Land Rover, Adient, Friargate, Coventry Building Society, the Coventry and Warwickshire Chamber of Commerce, Birmingham Airport, PET-Xi, SCC, Pertemps, and CEF (City Electrical Factors) are also Bid Development Sponsors.