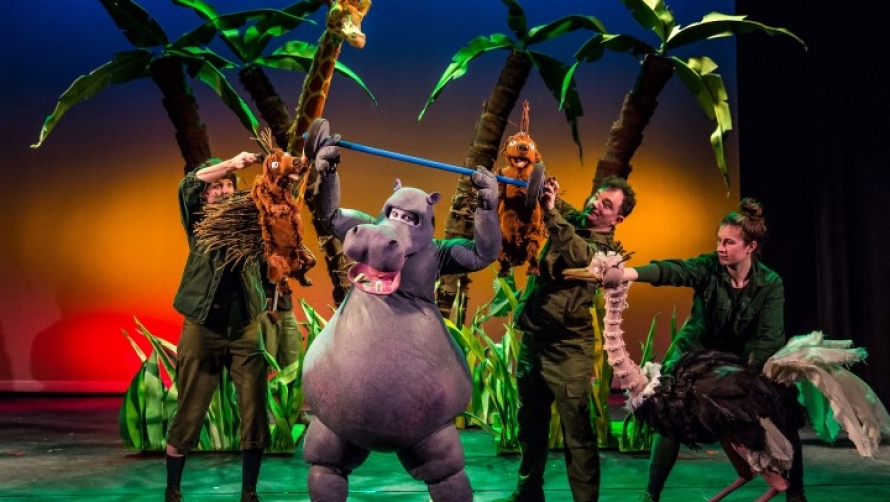 We had a chat with Sheila the Hippo right after she returned back to Earth from her spectacular trip to the moon!

Hi Sheila – how exciting to meet you! How are you today?
I’m great thanks. I’m loving all the attention you get when you’re the first hippo on the moon. I always knew I’d be famous!

Was it fun to build your hippopo-rocket with your friends?
Well I did most of the work really. I’m the one with the big ideas and the imagination!

Don’t you hate it when it starts raining right when you’re about to go to the moon?! What did you do while you were waiting for the rain to stop?
Well first I had a tantrum because I was very understandably upset. Then I sang an amazing song and everyone in the jungle was very moved and said I was the very bravest most inspiring hippo in the world.
Then I had a go at Derek’s sudoku but it was too hard, so I had a ham sandwich instead.

What was the moon like? Was it made of cheese as many people say?
Yes it was. But it was stinky blue cheese which is far too smelly for me. I like a nice mild cheddar.

What did your friends say when you came back?
They were happy I got home safely and also they were very proud of me.
Then we had a disco in the jungle to celebrate, Keith the giraffe can really throw some shapes.

Now that you got on the moon… Where do you want to go next?
I have a lot of ideas. I heard no hippo explorers have been to the Bermuda Triangle yet, so I could be the first. Alternatively I’ve heard Blackpool is nice this time of year.

You say hippos like to dream big. Do you think kids should too?
Of course. Although children aren’t quite as clever as hippos they can still dream big! You really can achieve anything if you believe in yourself and follow your dreams. And I was lucky to have the best friends to help me along the way.

The First Hippo on the Moon is at Warwick Arts Centre from Thu 1 Jun until Sun 4 Jun. For more information and to book tickets click here.