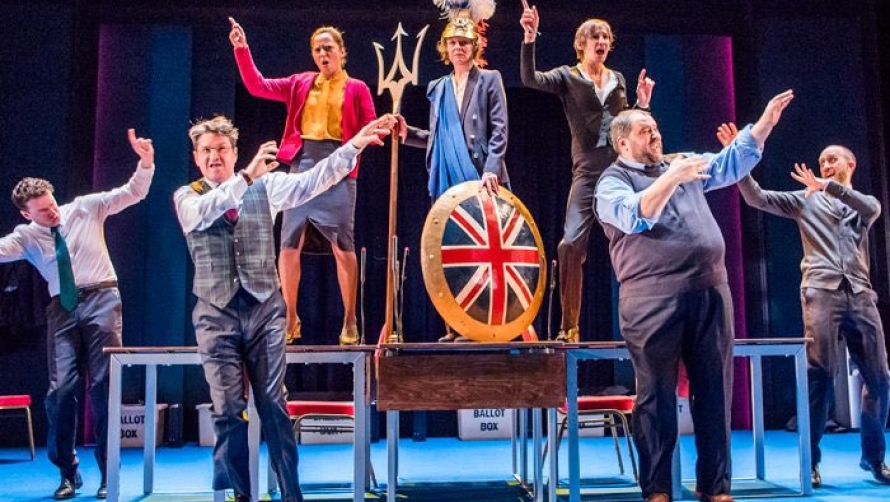 How exactly do you go about portraying Brexit onstage? It’s a difficult question and yet Rufus Norris and Carol Ann Duffy’s new production My Country: A Work in Progress is working to comprehend the incomprehensible diversity of the EU referendum.

Have you been living in your own political ‘bubble’? Or, perhaps, you don’t really care for politics at all? Regardless of your beliefs or the way in which you voted, there is something to be gained from this piece of theatre for everyone because it offers the chance to understand the differing viewpoints and experiences of people living throughout the United Kingdom. The play is framed as a meeting- convened by Britannia- of different constituent parts in the UK (including, Cymru, Caledonia and the North East) in the run up to and aftermath of Brexit. Each personified region expresses the viewpoints of their inhabitants with words that have been drawn verbatim from real testimonies gathered from people ages 9-97 by the creators. The way in which these testimonies are woven together and juxtaposed illuminates both the similarities and differences of opinion in the national mind; it is, as Rufus Norris has put it, human music.

The set is simple- reminiscent of a town hall- but highly effective, as this allows the weight of the spoken words to stand front and centre; however, thanks to the fluidity of movement, some perfectly timed comedic and musical interludes, and variations in lighting design, the stage is never dull. This is to say nothing of the performances that are being showcased. It is a master class in attention to detail, with each actor handling a range of highly nuanced dialects as they channel the different interviewees, to which they are giving a voice, effortlessly. Special mention here goes to Penny Layden as Britannia who does a cracking impression of Boris Johnson (amongst other key political figures in the referendum) complete with his recognisable body language.

My Country: A Work in Progress is surprisingly funny, disarmingly poignant and oh so timely. It is theatre that is generating- and actively encouraging- a conversation that needs to be had by giving a voice to those who have not felt heard; it allows an audience to listen and understand, whilst also going some way to bridge the gap that led to such a divisive vote.

The National Theatre’s My Country; a work in progress is at Warwick Arts Centre until Saturday 27th May. For information, click here