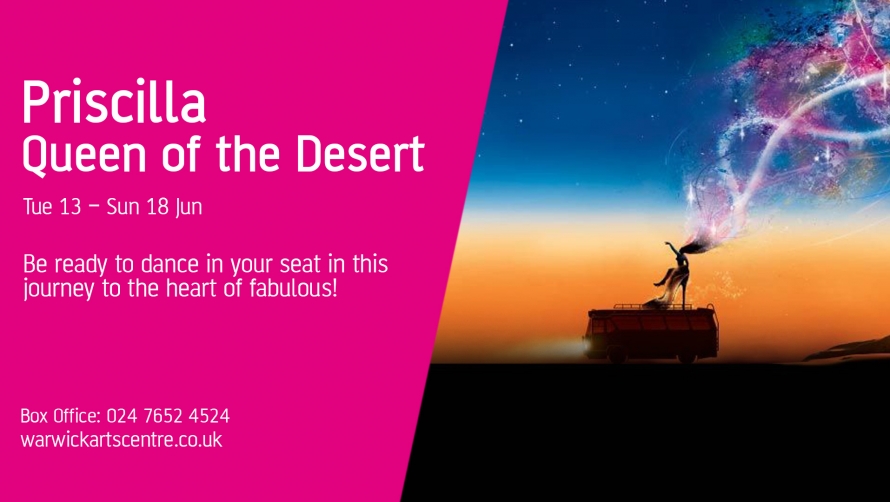 Jamie Sheerman is the director and one of the talented team behind the wonderful Priscilla: Queen of the Desert.

The heartwarming and uplifting adventure of two drag queens and a transgender woman and their battered old bus (named Priscilla) will drive onto the Warwick Arts Centre Theatre stage on the 13 – 18 Jun 2017. We caught up with Jamie ahead of the show’s opening to talk rehearsals, disco classics, and gold platformed boots…

1. Priscilla Queen of the Desert is not only a massive cinema sensation, it’s also an Olivier award winning show – what drew you towards staging such a spectacle?
It’s such a feel good show filled with so many great songs, humour and extravagant costumes that we HAD to do it! As well as all this the piece also looks at more hard-hitting subject matter and focuses on the acceptance of being who you are – it sends a really positive message out to the audience.

2. We bet you have had a blast rehearsing – have there been any highlights so far?
Rehearsals have been such good fun! We’ve been in tears at times both due to the hilarious script but also with moments that are really touching. Watching some of the boys learn to walk in high heels has been extremely entertaining too!!

3. It’s an all singing, all dancing show – do the cast have to keep high levels of fitness to ensure they can get through a performance?
The whole company have worked their socks off over the rehearsal period – they have been so dedicated and have had to learn so many routines so if they didn’t have a high level of fitness before doing this show – they do now!

4. We’re expecting some larger than life costumes – can you give us a sneaky peak as to what the cast will be wearing?
When it comes to the costumes, to see it is to believe it! The guys at Charades, where they have been hired from, have done an incredible job putting them together – giant cupcakes, larger than life wigs and flippers with high heels, just to give you an idea!

5. The iconic soundtrack goes hand in hand with the show – what songs can we expect to hear and which are the favourite numbers?
The show is jam packed with dance floor classics from the likes of Bananarama, Pet Shop Boys, Aretha Franklin Donna Summer and many more! I think the company enjoy performing the empowering “I Will Survive” by Gloria Gaynor the most!

6. It must be all hands on deck at the moment – what’s happening in the run up to the show?
There is so much going on right now – the company are relentlessly rehearsing – going through big dance routines and running the show to get it slick, ready for an audience. The marketing team are working with many local groups and companies to get the word out about this fantastic show and our costume department are collating measurements and getting the cast fitted for their many costumes!

8. Sell your show in tweet…
For a fun-filled evening of laughter, music, dance and drama – get down to the Warwick Arts Centre this June and unleash your inner Diva!

Priscilla: Queen of the Desert – presented by Three Spires & Guildhall is on from Tue 13 – Sun 18 Jun. For more information and to book tickets, please click here