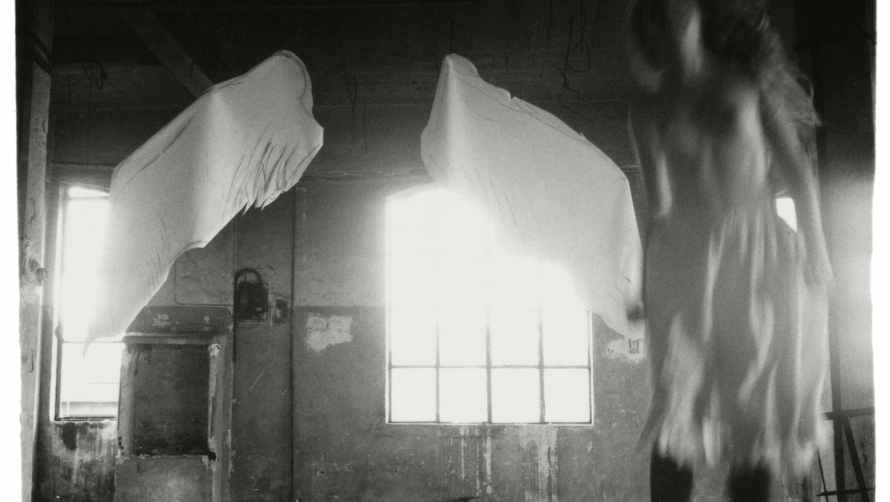 In our new series of interviews entitled ‘My Favourite Things…’ we talk to our team, students and audiences about their must see pieces of art, theatre, film or simply things they love about Warwick Arts Centre. Here’s Mead Gallery’s head steward, Melanie Stavrou, telling us about the photography collection of Francesca Woodman.

The diversity of the artworks showcased in the current exhibition, titled Room, is immediately noted even upon entering the Mead Gallery. The combination of work exhibited varies from several photographic series by artists like Nan Goldin and Joanna Piotrowska to the bold structures of Louise Bourgeois’ Cell XVII (Portrait) (2002) and Marvin Gaye Chetwynd’s performative The Folding House (2003). The collection of artworks does not only aesthetically fill the white space, but also cohesively portrays the female interaction with different forms of rooms.

Personally, the artwork that has captivated my attention the most is a series of photography by Francesca Woodman. The photographs being exhibited were predominantly produced during the 1970s in New York and Italy. This is some of the earlier and only work of the artist who passed away at a very young age; this may also contribute to the mystery of her artwork which in recent years is gaining momentum within the international art seen. Woodman’s black and white photographs tend to portray either herself or other nude female models interacting with various spaces. Some are more explicit than others in their portrayal of the female body, as well as the function of the room.

However, from my standpoint the most captivating photographs out of the series being exhibited, are the ones which the female figure is either distorted or hidden and is therefore, merging with the background. There is a raw intimacy that can be observed from the artist’s work, making you want to stand and observe it indefinitely. This may also be amplified by the scale of the artwork as it is smaller than the size of someone’s palm.
This transience is evident in one particular photograph: From Angel series, Rome, (1977), which may also be singled out as being slightly different in its effects than the rest. This may also be caused by the uncertainty of whether the female body is fully clothed or not. The distortion of the female figure within this particular space is personally interpreted in two core yet opposing ways. The one projecting the essence of what it is to be entrapped, unable to escape and thus, overpowered fading into the background. The second being that feeling of exhilaration from finally being free from the captivity caused by the rigidness of the human structures – being represented in this instance by the hollowness of the abandoned room. Either way, it elegantly allows the viewer to question the function and impact of the domestic space or even possibly how different parts of our selves tend to prevail within various rooms.