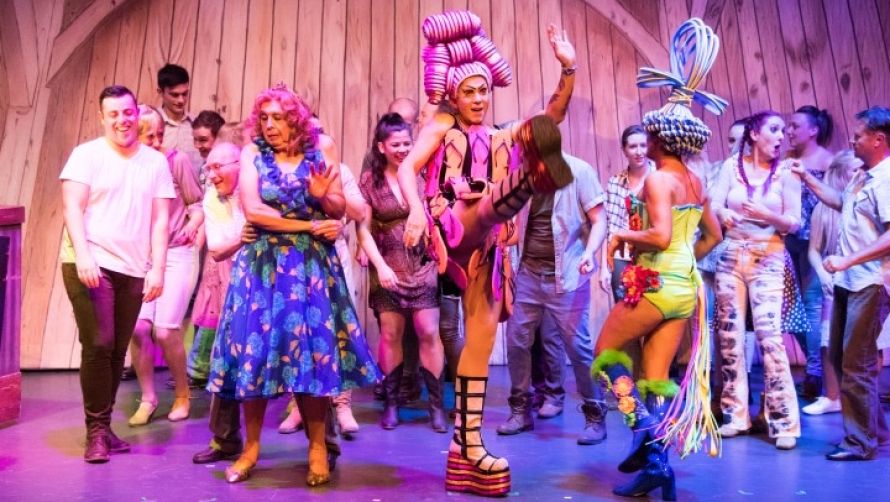 If it’s a fun and fabulous night out you’re looking for then you can’t really go wrong with Priscilla, Queen of the Desert the Musical. Based on the 1990s film of the same name, it tells the tale of three drag queens travelling across Australia to perform a show to aid the failing venue run by the secret wife of one of the trio, and so that he can meet his son. The film sees the drag queens perform the hits of ABBA; however, this music is now intrinsically linked to the smash-hit musical Mamma Mia. The songs in this musical, then, are all disco classics which are brought alive by the terrific characters and some outrageously elaborate costumes.

I shall put my hands up and admit that this is a show I have actually seen several times in different forms. The production originated in Australia before moving to the West End and then eventually transferring to Broadway. This amateur production by Three Spires and Guildhall is a mixture of previous productions and is very effective. The audience was enthralled the night I attended. The changes for different markets were small but some of them, I missed. The opening number was originally Petula Clark’s Downtown, but has since been replaced by It’s Raining Men which, while a definite crowd pleaser, I personally don’t think works as well. One of the trio, Adam, also has a desire to climb Ayers Rock and sing a medley of Kylie Minogue classics, but this was changed for Broadway to Madonna.

I once read the words “It takes a man with balls to play a woman” and this is especially true of this production. The whole male ensemble turns in strong performances and show no reservations at kicking up their high heels. Particular mention should go to Steve Smith as Bernadette, one of the lead trio, whose comic timing is impeccable and had the audience in stitches. Huge praise should also go to the production team. Priscilla herself is a full-sized bus and some productions of the show have struggled with the bus breaking down. A recent UK tour even saw the ill-advised move to scale back the bus to little more than a metal frame, which was very disappointing. There is no sign of this here as Three Spires and Guildhall cope admirably with a bus of full size, along with quick changes of award-winning costumes. I mean, why wouldn’t you garnish a scene about painting with dancing paintbrushes? Or highlight the line ‘someone left a cake out in the rain’ from MacArthur Park by having dancing cupcakes put up umbrellas? Logical, really, no?

It is an uplifting show which celebrates difference, teaches us it is okay to be who we are and gives us plenty of laughs. It’s disappointing, then, that in this as well as most other productions of the show I have seen, a moment where homophobic language is used to cause shock, actually elicits laughs from a large proportion of the audience. But the actors have always coped admirably with this, without exception. This isn’t an ‘issues’ musical, and you’re quickly guided back to laughter.

It was a pleasure to see a show which I enjoyed so much previously performed with such fearlessness and aplomb by high-quality talent. It is clear to see that this is by no means an easy show to stage, so huge congratulations are in order for the entire cast and crew of this theatre company. A standing ovation was given by the audience but not because of the urge to dance in the finale, but out of admiration for everyone involved.