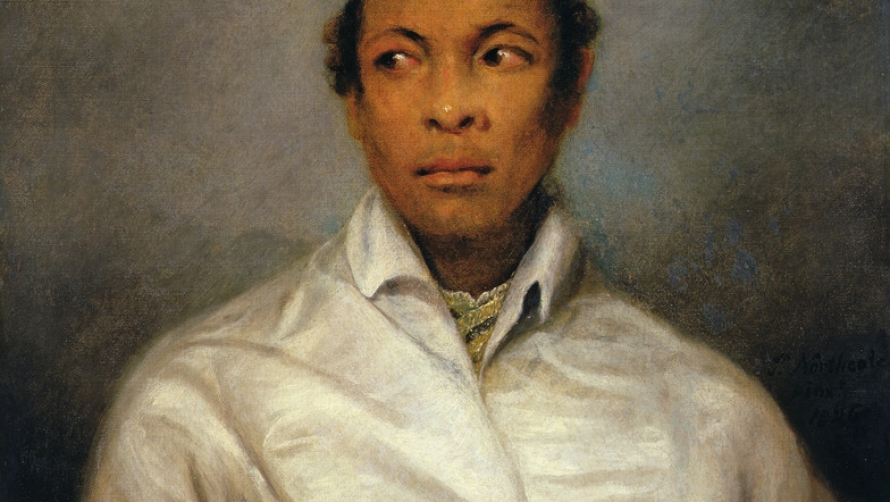 On Thursday August 3rd Coventry will honour the achievements of one of the greatest figures in both black history and the history of theatre: the Lord Mayor Tony Skipper and the veteran actor Earl Cameron CBE will unveil a blue plaque commemorating the Midlands city’s unique links to the African American actor Ira Aldridge, who died 150 years ago.

In 1828, in the age of slavery, Aldridge became Manager of the Coventry Theatre – the first black person ever to run a British theatre. His performances and the plays he presented led the city to petition Parliament to abolish slavery. He was only twenty.

In an open letter to the people of Coventry, Ira Aldridge stated his belief that ‘Being a foreigner and a stranger are universal passports to British sympathy.’

Ira Aldridge broke through the racial barriers. He came to England to escape racism in America (he had been savagely beaten for daring to act in Shakespeare) only to encounter prejudice once again. But he persevered against all odds, performed for the crowned heads of Europe, and has become an inspirational figure for artists from Paul Robeson to Adrian Lester, who recently played Aldridge in Lolita Chakrabarti’s drama Red Velvet.

Lolita Chakrabarti on the Coventry event: “It is so unbelievably gratifying to see Aldridge get his recognition at last.’

The ceremony marks the 150th anniversary of his death.

Guest of Honour at the unveiling on August 3rd will be the veteran – and still working – Bermudan film star Earl Cameron CBE (Inception, Thunderball, The Interpreter) who was trained by Ira Aldridge’s daughter Amanda. Mr. Cameron has been a key part of the campaign to honour Ira: he will be 100 on August 8th.

The campaign to install a plaque in Coventry was launched last November when, in a torchlit procession, Earl Cameron laid flowers on the site of Ira Aldridge’s long-lost theatre and by leading actors including the cast of the drama-documentary Against Prejudice, in which RSC Associate Artist Ray Fearon played Ira Aldridge.

Professor Tony Howard, who leads Warwick University’s Multicultural Shakespeare project, comments: ‘It was moving. The Black Youth Theatre sang songs that Ira Aldridge himself performed on that spot nearly two centuries ago, and they sang them to a gentleman who knew Ira’s daughter. Three generations came together to honour a forgotten moment in our multicultural past. In January 1828 Ira Aldridge was advertised as a fairground attraction – “A Most Extraordinary Novelty, a Man of Colour”- yet only a few weeks later Coventry gave him the keys to its theatre.
‘It was obvious there had to be a permanent memorial.

‘The building Aldridge managed was demolished long ago, and the Blitz even destroyed the streets around it. So the plaque marking the site will be in the heart of modern Coventry, in the Precinct. Every day hundreds of shoppers will be reminded of a great African American and of the city’s openness to “foreigners and strangers”. A month ago Arts Council England admitted that still not enough has been done to open up theatres to diversity, especially at the level of “leadership”. The Ira Aldridge story reminds us of what can be done.’

Laura Mcmillan, Manager of Coventry City of Culture Trust, said: “Ira Aldridge is a figure of major international significance and it is fitting that his very strong connection with Coventry is marked in this way. Coventry has long been recognised for its willingness to welcome people from across the world and that sense of openness and inclusion is as strong today as ever. It is also an aspect of city life which is expressed in the range of cultural and artistic groups who are thriving in Coventry and which we hope will lead to us landing the UK City of Culture title later this year.”

Professor Christine Ennew, Provost of the University of Warwick, said: “As Coventry celebrates being shortlisted to become the UK’s City of Culture in 2021, it is only right that we remember our city’s rich cultural history. The University of Warwick is proud to support this fitting tribute to a cultural pioneer and to help ensure that future generations learn of Ira Aldridge’s remarkable life and his time in Coventry. We are also delighted that Earl Cameron, an Honorary Graduate and member of the Warwick family, will be there as guest of honour and that we can join in the celebrations of his 100th birthday.’

Speaking about Ira Aldridge and his memories of his daughter, Ms.* Amanda Ira Aldridge, Earl Cameron* said: “Although I had done quite a lot in the theatre, I had not done anything really outstanding or demanding as an actor. By chance, I was introduced by one of the cast to a lovely lady, Ms. Amanda Ira Aldridge, a very renowned speech therapist. She was in her late seventies at the time. I started to take elocution lessons and she helped me greatly. Her father had become a great actor; he played many of the great Shakespearean roles, Lear, Othello of course, and Macbeth. Yet there is very little to read about him. It’s a pity.”

WHERE:
43-47 Upper Precinct, Coventry. Outside the former British Home Stores.

WHEN:
Thursday August 3rd, 2.30 pm. To be followed by a reception at the Belgrade Theatre.